I was recently interviewed by a Spanish journalist about the clown scares sweeping the country; here’s an excerpt:

Q: What is your opinion on the recent sightings of terrifying clowns in the United States and other countries?

A: The scary clown panic has spread across the country to dozens of states and even internationally, fueled by hoaxes, copycats, pranksters, rumors, and social media. The creepy clown panic became so serious that it was addressed in an October 4 White House briefing!

Q: Why is this phenomenon occurring right now?

A: There are several reasons why this scare clown panic is happening now. The most important is probably the effect of social media. People see these scary/funny clown photos on Facebook, Twitter, Instagram, etc. and get inspired to dress as a clown and participate in the scares. Plus, of course, the news media is reporting these stories a lot.
Q: What could be the motivation of those people who dress as clowns to scare people?

A: Most of them are doing it for fun and attention, they want to make the news—but do it safely and anonymously, without facing any consequences. Even if the police come, there is very little they can do since dressing as a clown is not illegal. There are a handful of reports of minor injuries, but nothing serious, no abductions or murders by these hoaxers. After all, if you really want to assault or injure somebody, you don’t need to dress as a clown to do it!
Q: According to your book Bad Clowns, why is the clown in all societies and cultures?

A: The clown character, historically and culturally, has always been an ambiguous person—neither good nor bad, but sometimes either or both. The clown is a trickster figure, as is the Devil, of course, so there has always been an element of the unexpected, the scary or threatening in the clown. But the type of clown most people are familiar with these days is of course the good, happy clown. So these scary clowns subvert that idea, and that’s one reason they are so interesting and compelling.
Q: According to your book, why are many people afraid of clowns?

A: There are several reasons why people are scared of clowns, but one is that clowns are masked, and people are uneasy around masked strangers—for obvious reasons! Plus, the makeup is often garish and exaggerated, which looks okay from a distance (for example from the seats in a circus), but looks scary close up. 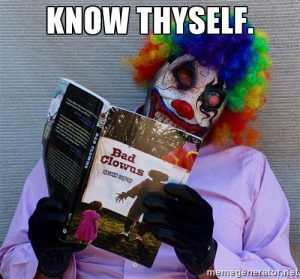