Hurricane Maria’s devastation continues in Puerto Rico… As The New York Times reported, “Daybreak in Puerto Rico on Thursday exposed the crushing devastation wrought by Hurricane Maria — splintered homes, crumbled balconies, uprooted trees and floodwaters coursing through streets. The storm cut a path through the island on Wednesday and 100 percent of the territory remained without power. Officials predicted that it could take months to restore electricity as rescue brigades ventured out to assess the toll of death and injury. Maria had entered Puerto Rico’s southeast side on Wednesday with category 4 winds of 155 miles per hour, then lost strength, regained power Thursday and continued its furious roll northward, bringing pounding rains and heavy winds to the Dominican Republic.”

Hurricanes are well known in the region, but lesser known is how another devastating storm twenty-eight years ago, Hurricane Hugo, helped spawn the world’s most famous cryptozoological vampire: the chupacabra.

In 1989 Hugo killed a dozen people in Puerto Rico and devastated the island’s crops; banana and coffee exports were nearly entirely destroyed. Estimates of the damage reached $1 billion, as tens of thousands of Puerto Ricans were left homeless by the wind and flooding. The hurricane left a lasting legacy on the island, and was still very much in the Puerto Rican consciousness six years later when the chupacabra first emerged.

In Puerto Rico I interviewed the original chupacabra eyewitness, Madelyne Tolentino, and asked her where she believed the monster came from. Tolentino responded, “Look, a journalist told me that El Yunque [jungle wildlife refuge in Puerto Rico, said to be the chupacabra’s origin] was allegedly closed down because of the damage caused by Hurricane Hugo. He told me that the truth was that some experiment had escaped—not monkeys or anything like that. They never found those creatures. The journalist… knows a lot about it, because he’s been researching this for a while.”

This explanation, shared by the tabloid media, is widely accepted among Puerto Ricans, that the US government created the chupacabra in a secret laboratory, in a clandestine genetics experiment gone horribly wrong, a sort of Frankenstein-like conspiracy theory. As I discuss in my book Tracking the Chupacabra, there are clear and significant parallels between the chupacabra’s origin and that of the monster Sil in the 1995 film Species. Species—whose first scene is set in rural Puerto Rico—begins with a genetics experiment, led by scientist Xavier Fitch (Ben Kingsley). He has injected alien DNA sequence into human eggs; most died, but one was allowed to grow into a seemingly normal human child called Sil. But Fitch aborts the experiment when Sil begins aging at a fantastic rate, and during REM sleep, alien spikes emerge from the girl’s spine. He reluctantly decides to kill Sil, fearing that the experiment may soon grow out of control—and it does. Sil escapes the building and out into the wilderness to prey. 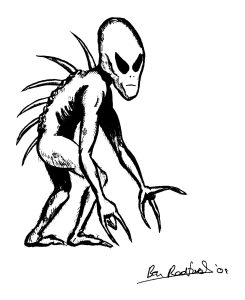 The most popular theory about where the chupacabra might have been able to live undetected for all those years (except for rare appearances sucking goats and chickens) is in the El Yunque rainforest on the eastern end of the island. Given the thick vegetation this theory might seem plausible, except that El Yunque, though a sizeable park at 28,000 acres, is also the most popular tourist spot in Puerto Rico, attracting over one million visitors each year. That’s an average of nearly three thousand tourists walking and hiking in El Yunque every day, and more than eighty thousand each month.

Yet apparently not a single tourist reported seeing, photographing, or being attacked by a chupacabra (nor, to my knowledge, finding the alleged chupacabra victim carcasses that would presumably litter the rainforest floor). It beggars belief to think that one or more chupacabras managed to live for years in such a heavily traveled area without ever being discovered or leaving traces of their existence. (The top-secret genetics lab where the chupacabra was said to have been created has never been found either.)

Legends (and particularly urban legends) incorporate regionally specific and accurate place names as they evolve. For example a generic story about a woman’s tragic suicide, or the spot of a gang initiation attack, will change from place to place. The details in each local version will include specific actual locations and even reference real historical figures. This process lends credibility to the stories and legends, making them more salient and likely to be shared.

Hurricane Hugo was only one of several factors that helped spawn the chupacabra legend, but the storm played a key role in the creature’s pseudohistorical folklore, the public’s understanding of where the creature came from, and why it suddenly appeared in Puerto Rico.