It’s always a little embarrassing to miss an important birthday or anniversary, and I confess that I’ve been especially busy over the past month and overlooked an important date.

That date was about a month ago, when The History Channel suffered one of the highest-profile blows to its credibility in, well, the history of the channel.

The 1937 disappearance of pioneer pilot Amelia Earhart and her navigator Fred Noonan in the Pacific Ocean has been the subject of continuing research, debate, and speculation—most recently in a show titled Amelia Earhart: The Lost Evidence. Here is the History Channel’s explanation of the show’s premise:

“Buried in the National Archives for nearly 80 years, a newly rediscovered photo may hold the key to solving one of history’s all-time greatest mysteries. On July 2, 1937, near the end of her pioneering flight around the world, Amelia Earhart vanished somewhere over the Pacific Ocean. Most experts, including the Smithsonian’s Air and Space Museum, believe Earhart likely ran out of fuel and crashed into the Pacific Ocean. But no trace of the aviator, navigator Fred Noonan or her twin-engine Lockheed Electra airplane were ever found, confounding historians and fueling conspiracy theories ever since. Now, new evidence has surfaced in U.S. government archives suggesting Earhart might not have crashed into the Pacific at all, but crash-landed in the Marshall Islands, was captured by the Japanese military and died while being held prisoner on the island of Saipan.

According to HISTORY’s investigative special Amelia Earhart: The Lost Evidence, airing Sunday, July 9, retired federal agent Les Kinney scoured the National Archives for records that may have been overlooked in the search for the lost aviator. Among thousands of documents he uncovered was a photograph stamped with official Office of Naval Intelligence (ONI) markings reading ‘Marshall Islands, Jaluit Atoll, Jaluit Island, Jaluit Harbor.’ In the photo, a ship can be seen towing a barge with an airplane on the back; on a nearby dock are several people. Kinney argues the photo must have been taken before 1943, as U.S. air forces conducted more than 30 bombing runs on Jaluit in 1943-44. He believes the plane on the barge is the Electra, and that two of the people on the dock are Earhart and Noonan. As part of the program’s investigation, Doug Carner, a digital forensic analyst, examined the photo and determined it was authentic and had not been manipulated, while Kent Gibson, another forensic analyst who specializes in facial recognition, said it was ‘very likely’ the individuals in it are Earhart and Noonan.”

If the photo is what it’s claimed to be, it means that the “lost” pair were alive and well on a dock in the Marshall Islands in 1937. That still doesn’t fully explain where they went after the photo was taken, and as noted the show suggests they were captured by the Japanese and died in prison on Saipan—a fact that the U.S. government knew about and covered up.

Doubts were raised about that explanation before the show aired and quickly escalated afterward. The photograph was published in a 1935 Japanese-language travelogue about the islands of the South Pacific. Japanese blogger Kota Yamano found the book after searching the National Diet Library, Japan’s national library, using the term ‘Jaluit Atoll,’ the location featured in the photograph.

National Geographic, perhaps with a hint of rivalry-inspired delight, noted that “In the wake of Yamano’s evidence, the History Channel and the documentary’s on-screen personalities have expressed various forms of concern and disbelief. ‘I don’t know what to say,’ says Kent Gibson, the facial-recognition expert that the History Channel hired to analyze the photograph for Amelia Earhart: The Lost Evidence. ‘I don’t have an explanation for why [the photograph] would show up two years early.’”

Requests for additional clarification were not returned. In a July 11, 2017 statement the History Channel said that it has a team of investigators “exploring the latest developments about Amelia Earhart” and promised transparency in their findings, concluding that “Ultimately historical accuracy is most important to us and our viewers.” Erm, yes. 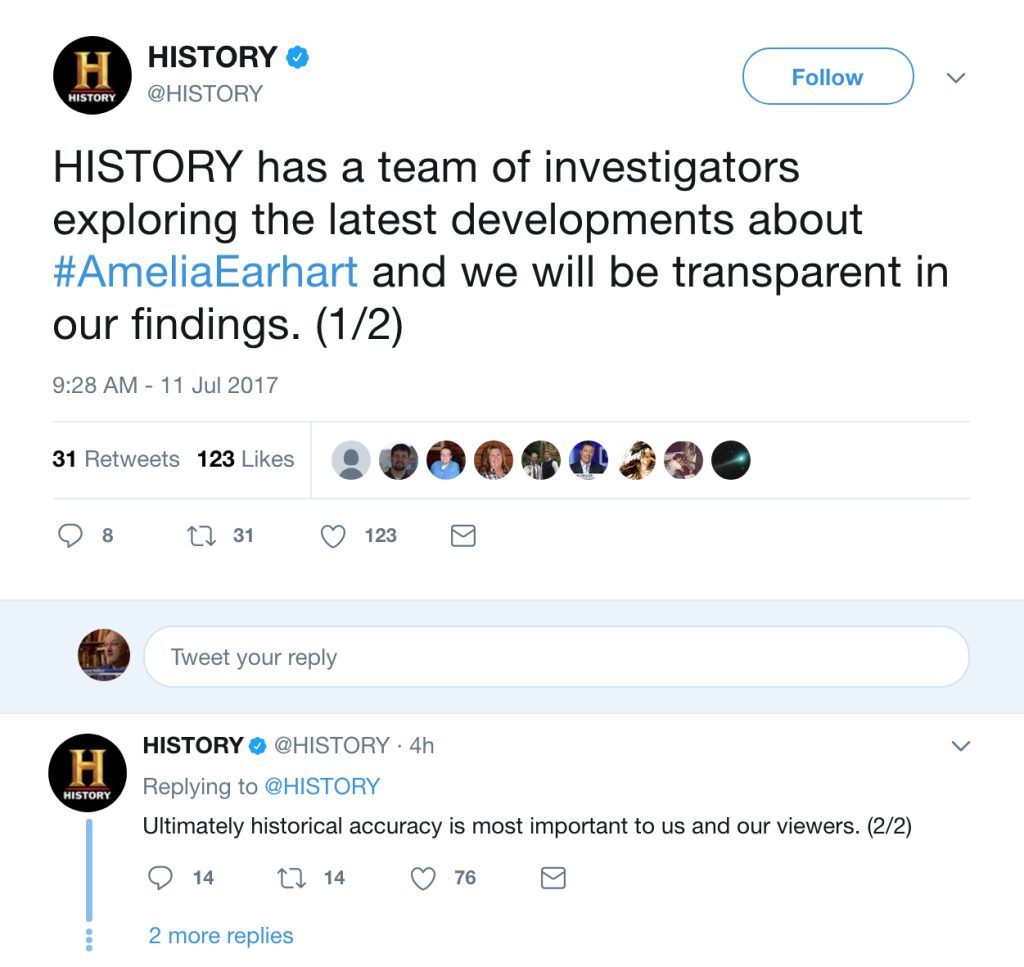 Over a year has now passed, and apparently the History Channel’s crack team of investigators still hasn’t been able to figure out how exactly they could have been fooled. If they’d like some help, they can read my analysis of the fiasco—or maybe they should just hire the Japanese blogger for an hour’s work.