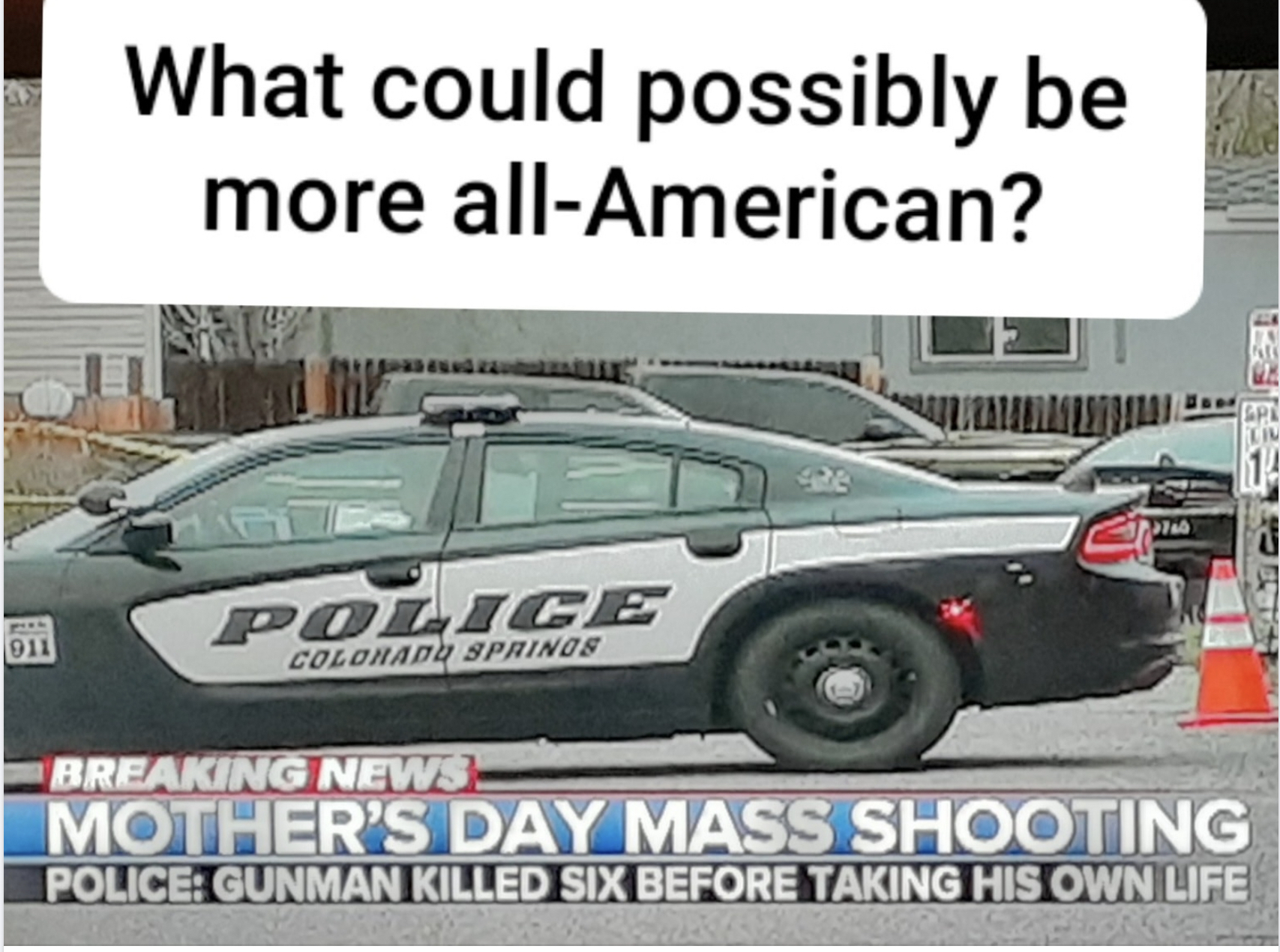 Mass shootings are, sadly, in the news again. Across the country violence is up overall in recent months, and gun-related homicides are on the rise. From Boston to Chicago to New Orleans, as covid restrictions relax shootings increase.

The natural question is: Who is doing all the shooting, and why?

There is a popular misconception that White males, specifically, are by far the most common mass shooters. In fact, mass shooters come from across the spectrum, from White men to teenage schoolgirls to Black men and even transgendered teens. Evidence of the diversity in mass shooters is abundant; it’s a problem that has plagued America for decades and has not escaped analysis from criminologists and sociologists.

A more interesting question, from sociological and media literacy points of view, is why the misunderstanding is so common. Part of the answer likely lies in the gulf between what experts and academics know and what the public perceives. This is nothing new; laypeople often believe things that are completely the opposite of the truth. Many laypeople believe, for example, that no one would falsely confess to a crime they didn’t commit, whereas psychologists and police detectives are well aware that people can and do admit to crimes they’re innocent of (often leading to miscarriages of justice, as in the famous Central Park Five case). The public often assumes that eyewitnesses and memories are rarely mistaken, despite decades of research by Dr. Elizabeth Loftus and many others. The public (wrongly) believes that overall crime rates trend high, despite being historically low; that homicides are more common than suicides (the opposite is true), and so on. So there’s nothing unique or special about this particular erroneous assumption; it’s just one of many.

Another part of the answer is that popular fallacies tend to be perpetuated and self-replicating, especially when stereotypical assumptions are made and not questioned. For example children’s book author (and niece of Kamala Harris) Meena Harris wrongly assumed that mass shooter Ahmad Al Aliwi Alissa was Caucasian in a tweet that got 6,500 Likes and 35,000 Retweets. In later correcting her error she perpetuated another, that “the majority of mass shootings in the U.S. are carried out by white men.” It’s of course common for people to comment ahead of the facts, but it was a revealing mistake that demonstrates how ingrained the assumption is. Many commenters on social media suggest that 90% to 95% of mass shooters are White, but as we will see the true number is less than half that.

How News and Social Media Mislead

Much of the answer lies in media literacy, and the perception that what the news media covers is representative of what happens. I discuss this fallacy at length in my book Media Mythmakers: How Journalists, Activists, and Advertisers Mislead Us, but the key thing to recognize is that some events are more newsworthy than others, and how a news event is framed plays an important role in how it’s understood.

As I discussed in a previous series on mass shootings, the public’s (and journalists’) understanding is clouded by the fact that the topic of mass shootings is fraught, not only with political agendas but also with rampant misinformation. Facile comparisons and snarky memes dominate social media, crowding out objective, evidence-based evidence and analysis. This is effective for scoring political points but wholly counterproductive for understanding the nature of the problem and its broader issues. The public’s perception of mass shootings is heavily influenced by mass media, primarily news media and social media.

The public is understandably confused about how common mass shootings are because they get their information about such events from the media, which distorts the true nature and frequency of these attacks. Most of us, thankfully, have no direct experience with mass shootings or school shootings; they happen occasionally and result in dead bodies, trials, news coverage, and often convictions—but there are also 325 million people in America. The chance of some person, or a few dozen people, being a victim of a mass shooting somewhere in the country in any given week is nearly 100 percent, but the chance of any given specific person—say you or me—being a victim is remote.

Why do shootings seem so common? Much of the answer lies in the news media and psychology. John Ruscio, a social psychologist at Elizabethtown College in Pennsylvania, describes “the media paradox”: The more we rely on the popular media to inform us, the more apt we are to misplace our fears. The paradox is the combined result of two biases, one inherent in the news-gathering process, the other inherent in the way our minds organize and recall information. As Ruscio explains: “For a variety of reasons—including fierce competition for our patronage within and across the various popular media outlets—potential news items are rigorously screened for their ability to captivate an audience. … The stories that do make it through this painstaking selection process are then often crafted into accounts emphasizing their concrete, personal, and emotional content. In turn, the more emotional and vivid the account is, the more likely we are to remember the information. This is the first element, the vividness bias: our minds easily remember vivid events. The second bias lies in what psychologists term the availability heuristic: our judgments of frequency and probability are heavily influenced by the ease with which we can imagine or recall instances of an event. So the more often we hear reports of plane crashes, school shootings, or train wrecks, the more often we think they occur. But the bias that selects those very events makes them appear more frequent than they really are.”

Imagine, for example, that a consumer group dedicated to travel safety established a network of correspondents in every country that reported every train and bus wreck, no matter how minor, and broadcast daily pictures. Anyone watching that broadcast would see dozens of wrecks and crashes every day, complete with mangled metal and dead bodies, and would likely grow to fear such transportation. No matter that in general trains and buses are very safe; if you screen the news to emphasize certain vivid events, accidents will seem more dangerous and common than they actually are.

A Closer Look at Mass Shooters

Because White mass shooters tend to attract more news media coverage than do non-White shooters, it creates a misperception about mass shooter demographics, a subject I previously wrote about.

A year later in January 2020 I conducted an identical analysis, finding total of 25 American mass shootings. Of the 25 mass shootings in the Gun Violence Archive database for January 2020, 4% (1) of them was committed by a white male; 4% (1) was committed by a Hispanic man; 68% (17) were committed by African Americans; and in 24%, or 6 cases, the attacker’s race is unknown. All the data are publicly available for anyone who would like to review the source material or examine other months.

It’s clear from even a cursory glance at the Gun Violence Archive demographic data that White shooters are, if anything, under-represented in mass shootings. Obviously it varies by month, but in the three months sampled above, the percentage of mass shooters that were White ranged from 2% to 16% with an average of 7.3%—despite comprising about 60% of the American population.

We can compare these numbers with data in peer-reviewed publications, including a recent analysis in the Journal of Interpersonal Violence, by Emma E. Fridel. Using a different dataset Fridel found that about 40% of all mass shooters (across three categories, as I described in a previous article) were White, compared with 37% Black and 23% Other/Mixed race.

Taking a closer look, of the 45 shootings in March 2021 (the above number, 46, reflects that one mass shooting, on March 18 in Oregon, had two mass shooters), only three of them got widespread news coverage. The first involved Ahmad Al Aliwi Alissa, who killed ten people in a Boulder, Colorado, supermarket on March 22. The second was Robert Aaron Long, who two days later killed eight people in Atlanta Georgia; and the third was Aminadab Gaxiola Gonzalez, who on March 31 killed four in Orange, California. Of these three cases, all were taken alive. This is of course not a representative sample, but we can note a few patterns. They are all male; ethnically diverse (one White, one Hispanic, and one Middle Eastern); two of the shooters were 21; one of the three had a known history of mental illness; and two of the three had criminal records. And, of course, all three used semiautomatic weapons.

A few weeks later a sixth-grade girl in Idaho shot and wounded two students and a custodian at her middle school. The name and race of the shooter has not been released, and it’s just as well because it doesn’t matter. Knowing her demographics is unhelpful; we already know that females are much less likely than males to engage in gun violence. Most of the social media memes and comments singling out this race or that race as representing mass shooters is not only factually wrong but misses the point. It’s false that most mass shooters are White men. But even if it was true, it wouldn’t matter.

In a previous article (titled “The Futility of Race-Naming Mass Shooters”) I explained that as simplistic and satisfying as it would be, no single demographic emerges from the data as “the typical mass shooter.” It depends entirely on what type of mass shooting you’re looking at, and varies by season and region. In the end, focusing on the race of mass shooters is unhelpful; it is not predictive of who is likely to engage in gun violence.

Singling out any specific race as being dangerous or more violence-prone than others is likely to do more harm than good (and in some cases racist). Unless you’re a criminologist or social scientist it doesn’t really tell you anything useful. It doesn’t help the average person decide who to watch out for, or who to avoid. It doesn’t help police or FBI profilers predict who is a threat. The percentage of mass shooters in any demographic is vanishingly small, and the chances of being killed in a mass shooting is also small.

While race is not a useful or predictive prism through which to understand or identify mass shooters, mental illness is no better and is in many ways a distraction from the deeper issues. As with other mass shooter demographics, there is little insight to be gained by focusing on the mental health history of mass shooters. There are several reasons for this, perhaps most prominently that most mass shooters across all categories do not have a prior history of mental health treatment.

The fact is that mentally ill people are far more likely to be the victims of violence than the perpetrators of it. Social justice advocates may feel like they’re doing good by shining a light on the presumed disparate social diagnoses of the roots of violence, but focusing on the role mental illness (whether alone or in contrast to terrorism) plays in mass shootings only further stigmatizes a vulnerable and marginalized group.

America is diverse, and growing more diverse by the day. Predictably, mass shooters reflect that very same diversity. The first step in solving a social problem, especially one as harmful as mass shootings, is understanding its nature and separating fact from fiction. If anything, the public’s focus on the race and mental state of mass shooters distracts from a more obvious commonality: access to automatic and semi-automatic weapons. Anyone—regardless of race, gender, or mental health status—is a potential threat when they’re armed with assault weapons.

A longer version of this article appeared in my CFI blog; you can find it here.