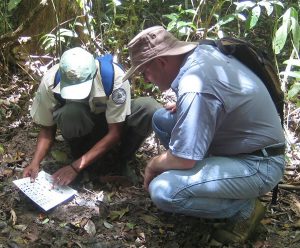 “Radford has stripped away the glamour, hearsay, folklore and hype to reveal what he believes to be the truth behind the crypto-legend, the reality at the heart of this unlikeliest of contemporary icons… After spending too many years in the headlines as a bloodthirsty monster with a rapacious appetite, the chupacabra has met its match. If you like your goatsucker served with a generous dollop of mystery and spiced with unsubstantiated rumours, you will not enjoy this book. If you prefer scientific detachment and common sense, it should be a feast.”

Radford puts forth a well-researched, engaging, and approachable study… his prose is clear and well presented. A serious study of the phenomenon of the chupacabra, it will be interesting to see if other researchers follow in his path…

This is the most comprehensive dissection of the chupacabra phenomenon that I have ever read. Ben Radford leaves no stone unturned in his tenacious, unrelenting pursuit of precisely what is —and, more to the point, what is not—behind this veritable celebrity of modern-day cryptozoology. Along the way, many sacred cows are slain and deceiving misconceptions laid bare. So is the chupacabra a bona fide mystery beast, or is it just a media-hyped monster of the imagination? Read this compelling book, which combines healthy skepticism with objective investigation throughout, and judge for yourself!

–Dr. Karl Shuker, zoologist and author of many books including The Beasts Than Hide from Man and Extraordinary Animals Worldwide

Radford does a masterful job—part detective investigation, part anthropological analysis—of revealing the not-so-awful truth behind the chupacabra legend. In fact, Radford’s deconstruction definitively and entertainingly sucks the mystery out of the poor old goatsucker.

Radford goes after the chupacabra with the same kind of knowledge and energy that Dr. Van Helsing showed in pursuing Dracula in Bram Stoker’s classic horror novel. Radford drives a metaphorical stake into the heart of the beast, reporting his investigations in lively prose, free of academic jargon yet rich with insights from folkloristics, biology, and psychology. Radford interviewed the eyewitnesses as well as reviewing the published and popular-culture descriptions of the chupacabra; then he applied scientific and folkloric analysis to the data. His conclusions—clearly and even humorously reported—provide the definitive word on this 21st-century vampire.

–Jan Harold Brunvand, Professor Emeritus of Folklore at the University of Utah and author of many books including The Encyclopedia of Urban Legends and The Truth Never Stands in the Way of a Good Story

Tracking the Chupacabra…is arguably the greatest cryptozoological book ever written. It’s a winner in every way, a slam-dunk debunk of the mystery surrounding the new monster on the block: el chupacabra. Radford build his case methodically, starting off with a history of vampire legends in general…. As with any geometric theorem, the elegance lies in the process of the proof, not just the result. The beauty of Radford’s book is that we get to watch how things ought to be done. The investigative process is as important as the ultimate conclusion. Radford’s book is a must-have in any good crypto-library.

Warning! Don’t read this book if you have an open mind. Ben Radford goes beyond ‘it’s a mangy coydog’ to explore an entirely new theory about the origins of the chupacabras phenomena. My cryptozoological colleages and fans, as well as the media, should read this one! I think Radford might be on to something! A fantastic read.

–Loren Coleman, director of the International Cryptozoology Museum and author of several books including Bigfoot! and Cryptozoology A to Z.

An amazingly thorough book… Radford brings the lenses of history, psychology, journalism, pop culture analysis, science, and other fields to bear on the phenomenon that is the chupacabra. Having sequenced the DNA of three of the purported chupacabra beasts myself, I am impressed at the depth to which Radford delves into the backstory behind the chupacabra.  Unlike the numerous uncritical popular writings about the chupacabra, Radford provides an easy to read yet scholarly coverage of this subject. 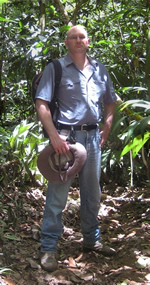 Tracking the Chupacabra combines detective work, scientific analysis, and a keen sense of human psychology to unravel the mystery of the chupacabra. Radford provides the cultural context for the monster, and offers a comprehensive look at both the mythological and biological elements underlying the mystery. Ben Radford is at once sympathetic to and critical of the field of cryptozoology, and the field’s practitioners would do well to follow his example of measured skepticism and commitment to science and reason. This is an engaging read that both scientists and the lay public will enjoy. Radford has slain the beast!

–David Daegling, author of Bigfoot Exposed and associate professor of Anthropology at the University of Florida

A wonderful adventure into the quirky legend of our newest popular cryptid. Radford manages a very rare feat of balancing the excitement and magic of the monster hunt, with the rational skeptical approach of the scientist. I really enjoyed it.

–Dr. Stephen Asma, author of On Monsters and Professor of Philosophy and Distinguished Scholar at Columbia College

Radford’s book systematically explains the chupacabra phenomenon, in all its varied forms and locations, based on science.

Radford spent five years hunting down and examining evidence of the chupacabra’s existence. Radford is thorough in his investigation; interviewing eyewitnesses, providing creepy photographs of otherworldly creatures, serving up DNA analysis, and contemplating theories of mass psychosis. Verdict: This objective probe will appeal to readers interested in exploring and exploding modern mysteries.

A fascinating study… Radford’s most interesting revelations are about the psychological and sociopolitical structures behind the folklore, especially as they relate to the monster’s origins in Puerto Rico….Radford’s book—which is well-written and a fun read—should be the last word on the chupacabra’s real-world existence.

Author Benjamin Radford isn’t going to make it easy for me to find one of the little goat suckers. His book Tracking the Chupacabra is by no means another collection of witness accounts and unsubstantiated facts. The author has not only gone on an expedition to find the elusive beast (complete with all the expected disappointment) but has researched just about every reported Chupacabra encounter with the journalistic zeal of Woodward and Bernstein…. After consuming the book I came to see that as much as I want a Chupacabra to exist, I need to check out the facts.

Radford has placed a stake squarely over the chest of the Chupacabra and hammered it into its heart. How many people can say they have definitively solved a mystery? Not many. One of them is Ben Radford, though. My favorite chapter, and they were all great, was chapter 4. This chapter details Radford’s search for the Chupacabra in Nicaragua. Radford actually sets foot in the jungle to find the vampire beast. How cool is that? This book not only details an investigation, but also details an adventure! Throughout this chapter you feel like you’re riding shotgun with Radford as he sets out to find this elusive creature. I thoroughly enjoyed this book! We can definitely say that Ben Radford has definitively solved the mystery of el Chupacabra!

I loved it – not because I love every monster book. I don’t. Most popular ones are quite terrible since they rehash the same old stories without references or critical thought. I loved it because this was a unique and comprehensive look a very “pop culture” monster. There was a ton of new stuff in here…. I’ll not give away the details of the stories, you simply should read it. In fact, I’ll go so far as to say EVERY person interested in the paranormal and paranormal investigating should read this book to see what a thorough investigation really looks like.

I wouldn’t have thought it possible to identify the original inspiration for the chupacabra but Ben Radford has done so & used the most important witness’ own testimony to prove it.

Excellent piece of journalism that answers one of the great modern day paranormal mysteries. Case closed.

“Benjamin Radford is a down-to-earth investigator of paranormal claims and ideas, including cryptozoology. I’ve read many of the classic books dealing with unknown animals going back to the day of zoologist and Fortean researcher Ivan T. Sanderson. This is the best book dealing with a cryptozoological topic that I’ve ever had the pleasure to read…. a sober, non-sensationalistic, and rational examination of a contemporary cryptid/folklore by a first rate investigator of the paranormal.”