Skeptics and psychologists often point out the fallibility of eyewitness testimony, though the general public continues to put great stock in it. It seems so self-evident that personal experience is a reliable guide to the world that when something “unexplained” happens, people often assume that the event must truly be mysterious.

There’s nothing wrong with personal experiences, but by themselves they are not proof or evidence of anything except that the person experienced something they didn’t understand or couldn’t immediately explain. Most people who report such experiences are being truthful (i.e., not hoaxing), but being truthful is not the same as being accurate. They may be completely sincere and honest, and simply wrong.

Example: A man on a boat in a lake sees something big and dark rise out of the water. When he gets to shore, he tells his wife he saw a lake monster.

Maybe he did; maybe he didn’t, but some questions must be asked:

1) How accurate is his perception? How good is his vision? What were the lighting conditions: bright daylight, dusk, or nighttime? How far away was it? Ten feet? 100 yards? A quarter mile?

2) How good is his interpretation? Why did he interpret what he saw as specifically a lake monster, instead of a fish, or a wave, or a sunken log? Did it have characteristics that convinced him it could not be something ordinary? Were there any other factors that might influence his interpretation or judgment (for example, alcohol or other drugs, health problems such as diabetes, exhaustion, etc.)? Had he reported seeing the monster before, or been told about the creature? Was he actively searching for the monster, or doing some other activity such as fishing?

3) How good is his recollection? Did the incident happen just minutes or hours earlier? Or was it reported weeks, months, or even years later? Does he have any memory problems? Has he told the same story before? If so, are the accounts different? The more often a person repeats a story, the more likely it is to have been embellished; details creep in or drop out over time.

4) How good is his ability to adequately report or describe his experience? How extensive is his vocabulary? Does he speak the same language as the person he’s reporting his experience to? Is he too frightened to speak? Are there any other factors that might affect his ability to fully communicate or articulate what he explained?

The same basic questions apply to all eyewitness experiences regardless of context. Note that an eyewitnesses’ account can only be considered completely valid if the person is not affected by factors such as these. If he clearly sees the object, correctly identifies it at the time, but can’t correctly recall or describe it later, then the sighting is compromised. If any part of the chain breaks down, if any one of these steps is dubious or missing, then there will be serious errors and mistakes in what is reported.

Misreporting a UFO or Bigfoot will likely have few consequences, except perhaps for the eyewitness’s credibility. But in many real-life cases, such mistakes can be deadly.

The Tragedy of John Crawford

Faulty eyewitness testimony led to the deaths of two people in an Ohio Walmart in August of this year. An article in The Guardian explains: “Police had repeatedly been told via a customer on the line to a 911 dispatcher that John Crawford III was pointing the gun at shoppers and may have loaded it with bullets.”

Crawford had picked up an air rifle from a shelf and wandered the store, the gun in one hand and cell phone in the other. Ronald Ritchie who was in the store and called 911, told the dispatcher at about 8:30 PM that “He’s, like, pointing it at people.” Police officers responded, and when one called back to confirm that the suspect was pointing a gun, the dispatcher confirmed: “Yes, that’s what the caller says, he’s pointing it at people.” Ritchie stayed on the line for several minutes, describing to the 911 operator what Crawford was doing from a safe distance: “He looked like he was trying to load it.” 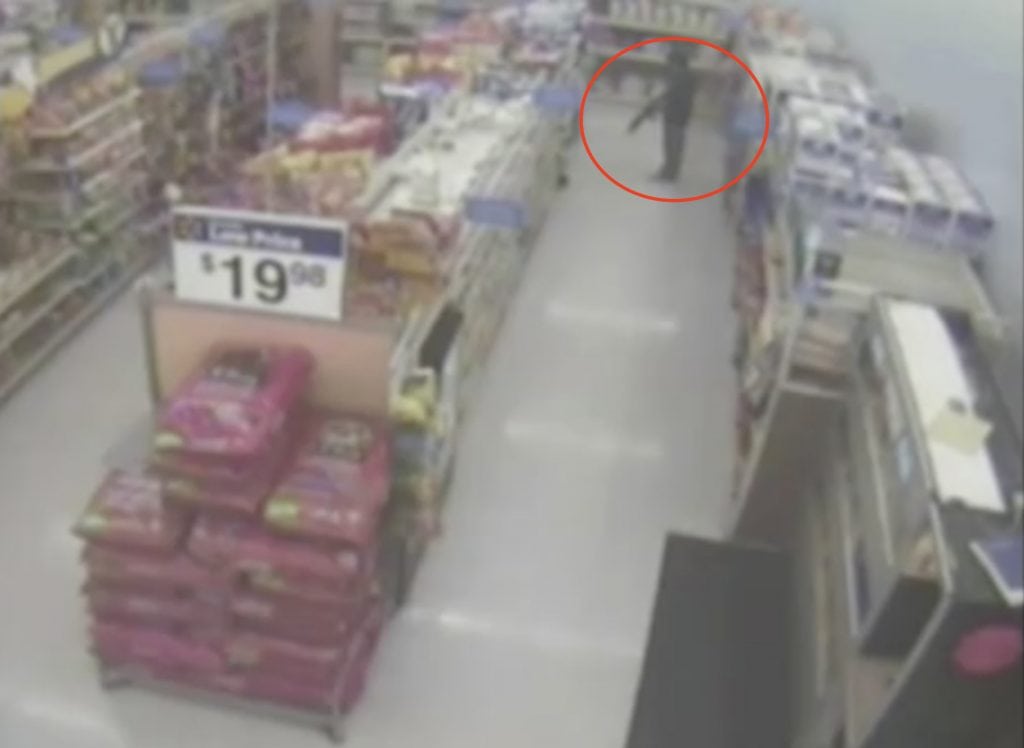 From the Guardian piece: “This, too, was relayed to the officers as they arrived at the store. About 55 seconds later, Angela Williams entered the pets aisle with two of her young children… Ritchie told the dispatcher: ‘He just pointed it at, like, two children.’ Forty seconds later, the dispatcher asked: ‘You said he pointed it at a couple of kids?’ Ritchie replied: ‘Right.’”

Crawford was immediately confronted by two police officers and shot dead; in the chaos Williams suffered a fatal heart attack.

Later investigation revealed that the eyewitness in this case was wrong in several key details. Video footage of the encounter, later released to the public, shows that Ritchie’s descriptions of Crawford’s actions were inaccurate. He was indeed carrying a rifle in one hand but with the benefit of hindsight and an elevated security camera vantagepoint we know that he was not pointing it at any children or threatening other customers. What Ritchie saw—or thought he saw, or claimed he saw—is another matter.

It’s unclear whether racism played a role in the eyewitness description; Ritchie is white and Crawford was black though there’s no evidence that Ritchie intentionally exaggerated the threat to police. As Snopes.com noted, “A judge later ruled that sufficient grounds existed to charge Ritchie with raising false alarms, but Hamilton County special prosecutor Mark Piepmeier declined to proceed, deciding that the evidence was not clear that Ritchie knew his descriptions of Crawford’s movements and actions were factually inaccurate.”

Reports of shootings at Walmarts across the country are not uncommon, occurring, for example, in Philadelphia in August 2018; Amarillo, Texas in June 2016; Tumwater, Washington in June 2018; Denver, Colorado in November 2017; Clinton, Utah in June 2018, and others. Whether the shooting was justified or not, the role of the original eyewitness played a crucial part in the deaths. The case was referred to a grand jury, which declined to indict the police officer who shot Crawford.

The public safety mantra “If you see something, say something” is good advice but psychologists know that especially in times of stress and surprise—as would happen when being in the presence of a suspected or confirmed shooting situation—people misperceive and misunderstand things. Countless cases prove this point. For example there’s the case of the D.C. snipers who killed ten people and badly injured three others in October 2002. Police were baffled by the killings, though an apparent break in the case came when several eyewitnesses described the shooter: A white man driving a late-model white van or box truck. Based on these multiple eyewitness descriptions, police stopped white vans along the Capital Beltway hoping to stop the killer. Yet when the snipers were caught, it was clear that the sincere, believable eyewitnesses with no reason to lie or exaggerate were completely wrong.

Instead of a single white man driving a white box truck, the murders were committed by two Black men driving a dark blue 1990 Chevrolet Caprice. In that case, the eyewitness testimony likely cost human lives: Police had in fact noted the Chevrolet at several of the crime scenes but did not stop or check out the car because the police and public were focused on the non-existent white van reported by eyewitnesses.

Eyewitness misidentification is the leading cause of wrongful conviction in America. Of the more than 200 people exonerated by way of DNA evidence in the US, over 75% were wrongfully convicted because of eyewitness mistakes. Indeed, according to the Innocence Project, “While eyewitness testimony can be persuasive evidence before a judge or jury, 30 years of strong social science research has proven that eyewitness identification is often unreliable. Research shows that the human mind is not like a tape recorder; we neither record events exactly as we see them, nor recall them like a tape that has been rewound. Instead, witness memory is like any other evidence at a crime scene; it must be preserved carefully and retrieved methodically, or it can be contaminated.”

Often in criminal cases there’s a strong and understandable desire to believe the victim. No one wants to question or challenge a person who has obviously undergone a horrible experience—but it must be done. That eyewitness reports are often very unreliable is not news to psychologists or experienced police detectives, but the general public is often unduly impressed with an eyewitness who says, “I know what I saw, and I saw him do it.” Maybe, maybe not.

And it’s not just in crimes: many people who believe in Bigfoot, UFOs, and ghosts put great faith in eyewitness reports—especially sightings by police officers and others in authority. Yet the evidence is clear and uncontested: people are not good eyewitnesses, and often sincerely claim to see things they did not.