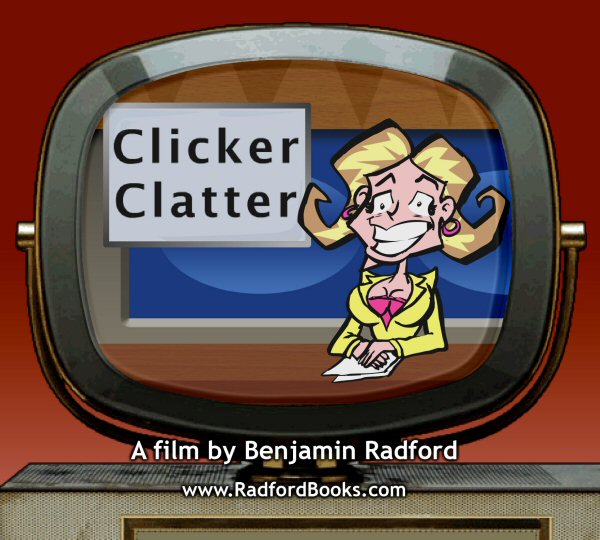 In 2003 I wrote a book of media criticism called Media Mythmakers, and though it was a modest success, I realized that no matter how good it was, relatively few people would read it.

Taking a page from The Simpsons and Jon Stewart, I decided that a few seconds of visual humor could as effective as a whole chapter railing against inane television, social hypocrisy, and shoddy journalism. I decided to adapt some of the ideas in my book into a script. I didn’t have the money to make the film until I inherited a few thousand dollars from my grandfather, a lifelong Voice of America journalist in San Francisco. The result is Clicker Clatter, a film which most thinking people can relate to–and which would do my grandfather proud.

Though I had a longtime interest in film and animation, I didn’t really know the first thing about writing a script or making a film. Yet the more I thought about it, I had all the pieces I’d need: Edward Summer, who wrote Mickey Mouse cartoons for Walt Disney Studios as well as the original screenplays for “Little Nemo,” was enthusiastic about producing the film. I had taken an animation workshop several years earlier with Animatus, a small, independent animation studio in Rochester, New York. I had been taking voice acting lessons from a professional named Toni Silveri, and she knew several voice actors who could do the characters. For the design, I wanted a visually interesting style and hired a professional caricaturist friend of mine, Adam English, to do the characters. Last but not least, I tapped a musician friend of mine, George Hrab, for the music.

I wish I could say that it all magically came together, but the truth is it was a hell of a lot of hard work. Almost no one involved in the project had done anything quite like Clicker Clatter, but it all got hammered out with a minimum of sobbing and debt-collector harassment.

A Director’s Attempt to Sell Out

Because Clicker Clatter was entirely self-financed, I had very limited funds and thought I would make some attempt to “sell out” to “corporate America.” In May 2006, as I was making a salad for friends, I noticed an odd logo on the back of some produce packaging touting something called the “Michigan Celery Promotion Cooperative.” I had no idea that there was actually an organization dedicated to promoting celery grown in Michigan, and was intrigued. I decided to contact the group and offer a product placement in my film. I’d include a character saying something like, “Isn’t this great celery? It’s grown in Michigan, you know!” or maybe a thank you credit at the end.

The price for my artistic integrity, I am ashamed to admit, was a paltry Benjamin. Yet even $100 was apparently too high, for my letter and offer were ignored. No check arrived, not even a case of wilted celery for the animators and myself to snack on. Nothing.

I followed up again several months later, as the film was wrapping up, one last chance to sell out, plug celery, and defray costs. Still nothing. I decided to note the Cooperative’s lack of cooperation with a (non)credit at the end of my film that states, “This film was made without the help of the Michigan Celery Promotion Cooperative.” Wonder if I’ll hear from their lawyers…

Thanks to Bwana Cushing and Martha Cushing, Jennifer Griffith, Mike Reiss, and Jennifer Lawrason.
This film was made without the help of the Michigan Celery Promotional Cooperative. 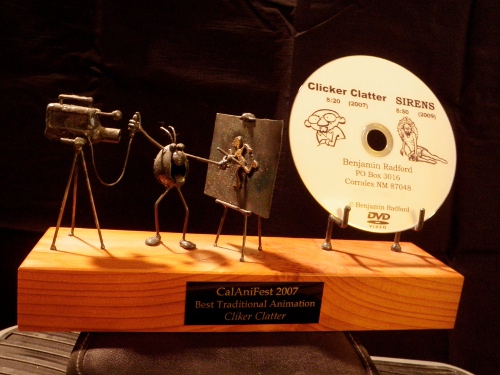