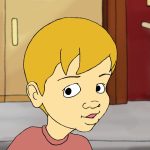 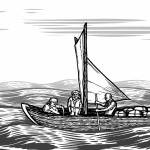 A young boy in a library neglects his math homework and is instead drawn into a world of fantasy while reading about the mythological Sirens, lovely women who lured ancient sailors to their deaths. Click each image above to see it fullsize.

My film Sirens started out as a short story I wrote as a teenager involving two teen brothers who visit a library on a summer afternoon. It had a twist ending, and many people liked it. Twenty years later, after the success of my first animated short film, Clicker Clatter, I decided to adapt my short story. The process of adapting a 250-word short into a film was more challenging than I expected. Once I decided that my film would have no dialogue, Sirens became more interesting and more universal– as well as more difficult. I could no longer have two main characters, as there would have to be dialogue, so the story got stripped down to one boy. And of course the beautiful and alluring Sirens.

I always had a fascination with mythology and strange creatures such as Bigfoot and lake monsters, and I wanted to combine that sort of fantastic imagery with the humdrum realities of daily life. I like the idea of the Sirens, the half-woman, half-beast creatures that lured sailors to their deaths in ancient days. I never expected to spend thousands of dollars and years of my life making a six-minute animated film about Sirens, but I found myself lured into their world.

–Learn more about Sirens on IMDb.