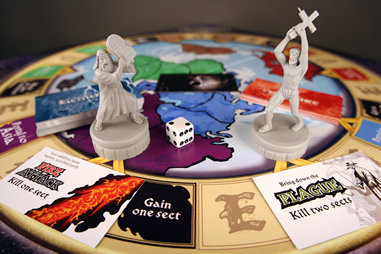 I thought I’d share a short history of Playing Gods.

I actually had the idea for Playing Gods way back in 2000 or so. My original plan was to have different gods from different eras battling each other for control over the world, such as Egyptian gods (Set, Bast, Osiris) duking it out with Roman and Norse gods (Thor, Zeus, etc.), Mesoamerican gods, and so on. I made a few sketches and wrote up some rules, then set it aside for a few years while I did other things like write books and investigate lake monsters.

After 2001 it became clearer to me that many of the world’s worst conflicts are rooted in religion. Lots of people believe that God is on their side, and as long as God is on your side, any actions you take are justified. Whether it’s the Catholic/Protestant violence in Northern Ireland, Israelis and Palestinians killing each other because both believe that God promised them the same chunk of desert, or Born-again Christian George W. Bush claiming he takes advice from Jesus and calling for a “crusade” against Muslims, the religious origins of much murder and mayhem have rarely been so clear. (Of course there are peaceful messages in all these religions as well, but apparently not enough to drown out the violent ones.)

So I pulled Playing Gods off the shelf and took it in a more culturally relevant direction. I decided to combine my idea with a satirical expression of my outrage at people killing other people for their beliefs. Players may still choose to be the old, discredited gods from ages past—or they may create their own equally discredited modern gods, such as the Almighty Dollar, Global American Idol, the Cult of Oprah, etc. But why not put a spin on it and include the figureheads of Christianity, Judaism, Islam, Hinduism, and Buddhism? After all, it is their followers who make the news almost daily for killing each other. (Been quite a while since followers of Zeus or Mithra have spilled blood for their gods.)

Even though Playing Gods is a satire and not intended to offend anyone, I’m sure there will be people who don’t like it. Big chain stores will never carry Playing Gods, so I’ll need the support of independent game and toy stores, as well as grassroots supporters and word-of-mouth.

The economy sucks, that’s no news, and more than one person suggested I didn’t have a prayer, bringing out the game now. But a board game is actually very good entertainment value for the money, keeping 2 to 5 people entertained for 30 to 90 minutes–and you can play it over and over for years to come. Plus it’s face-to-face fun, more interactive than Guitar Hero, and slightly less antisocial than Grand Theft Auto 4.