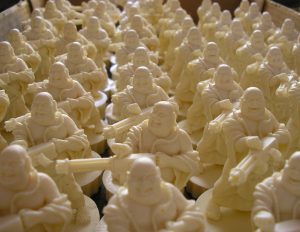 Q: I got a few friends together for Playing Gods several weeks ago and we really enjoyed it. I played the Flying Spaghetti Monster one of the times we played. We had a question: Are gods REQUIRED to defend when attacked, or can they give up without a fight?

A: The gods are not required to do anything! If they want to let another god kill or convert his or her followers for some strategic reason, they are certainly can. On occasion I have let other gods convert my followers, simply because I didn’t want to burn a bunch of Conversion cards defending them. I guess you could say I forsook them, which, though cruel, is almost worth it because it’s a chance to use the word forsook.

Q: We had one question on the Resurrection rule…the way we were playing was when a sect that has been ‘converted’ was killed, we killed the whole stack…given that, if the last sect was converted out of the game, and then attached, there is no way to be ‘resurrected.’

A: When you kill off a sect in a region that has been converted (possibly by more than one other god), you only kill off the top sect chip(s). Each individual attack is directed toward a particular god’s sects, thus if you are an attacking god, you may wish to use a Hurricane to kill off one god’s followers, then once that sect chip is removed, you might use the Plague to kill off two of another god’s sect chips underneath (and so on). As long as a god has at least one sect chip on the board (even if it has been converted), there is a chance of that god being resurrected.

Q: If my followers disobey me, or do not lavish sufficient praise upon me, can I kill them off?

A: Absolutely; lay some Righteous Vengeance on those ungrateful bastards! I’ve found that floods and earthquakes seem to get their attention especially well.

Q: The playing pieces include five figures from the main religions, but there’s a sixth piece with a round thing at the top. What’s that for?

A: That’s a generic, interchangeable god pawn so that you can create your own gods. You can use the sticker sheet provided to place the round stickers on top of the pawn, or make your own. You can even take a photo of yourself (or someone else) and stick it on the piece. In fact, feel free to use anything you like as a god pawn idol, from chess pieces to action figures!

Q: Is the game anti-religious?

A: No. The game is not anti-anything, except anti-boredom. Players can inject as much – or as little – real religion into the game as they wish. Players may pit Zeus against Cthulhu and Eric Clapton for control over the world, or pit Jesus against a Muslim figurehead. It’s all up to you. I hope the game is taken in the spirit in which it was offered. I’ve shown the game to Catholics, Buddhists, and a Muslim. They weren’t offended, so why should you be?

Q: How can I get Playing Gods at my local game or toy store?

A: Playing Gods is almost sold out, but a few may be available at Amazon.com and other fine retailers.

Q: Why isn’t Australia included on the board’s map of the world?

A: I tried to make it work, I really did, but I couldn’t get the game mechanics to work out with one extra continent. If it’s any consolation, Antarctica is missing too. My sincere apologies to Ozzies and Kiwis.

Q: I got the Expansion Pack, and I love the art and comments. How do I use it in the regular game?

A: It’s easy, just follow the rules on the card. The Expansion Pack is only for use if you are using one or more of the “big five” gods. Simply include the cards relating to the gods that are playing in that particular game and use them like any other. The only other rule is that a “gain 3 sects” card cancels out a “kill 3 sects” card.

Q: One of your Expansion cards, for the Muslim character, says something about 72 raisins. Am I missing something?

A: Yeah, that reference may have been a little too obscure, I had a touch of the Dennis Miller when I wrote that. A few years ago, Koran scholars concluded that the part about promising suicide martyrs “72 virgins” had been mistranslated, and it instead promised “72 raisins.” Now do you get it?

Q: What about the blank cards in the Expansion Pack? What’s up with that?

A: Those are optional cards for especially creative Playing Gods players. If you think of something funny or witty to say about a particular religion, or think up some interesting Act of God you’d like to see, just write it in the blank space and use it as a regular card. Otherwise leave it out.

Q: I noticed that the pawn idols don’t match the colored sect chips. Why?

A: I left the god idols all one color in case players want to customize or paint their own. It should be pretty easy to tell whose chips are whose followers just by looking at which player has a pile of those colored chips in front of him or her. Plus, by making the pawns not necessarily match the chips, people can choose their favorite color each time. If you’d like, you can buy small colored dots at office supply stores for a few bucks, and place a dot on the pawn of your choice.

Q: Why do the pawn idols that appear in the photo on the bottom of the box look different than the ones inside the box?

A: That’s because the mass-produced pawns were not created at the time the box art was done. It’s a chicken-and-egg thing: How do you put a photo of the finished game and all its final pieces on the box, before the game and its pieces are final and done? The only solution was to use the Limited Edition Playing Gods Idols in the photo. Note the disclaimer next to the photo saying that the pawns may not match the photo.

Q: What if I land on the Godkiller space, but I don’t have the card? Do I do anything?

A: No, it’s treated as a blank space. Optional rule: If you land there you can roll again.

Q: I landed on a portal to a continent and had an Expansion Pack Wrath card available to me that said “Kill three Muslim sects.” But there were no Muslim sects available on that continent. Does it become “Kill 3 Sects” of whatever religion is there?

A: No. If you land on a portal and the Wrath card is specific to a given religion, and there are no sects of that religion, then you can’t use the card at that portal. If you have the card, and you know where the Muslim sects are, then you would go to the portal where you can use the card! Also, say for example you are the Hindu god, and you have a card saying “Kill Three Hindu Sects.” You can’t use it (unless you want to kill off your own followers), but having that card in your hand gives you an advantage because you can try to keep other players from getting that card and using it against you. (Thanks to Norm Abshear)

Q: Is Balls Out Entertainment, the company that produced Playing Gods, part of some global atheist conspiracy?

A: No. We are simply setting the stage for The One True God to reveal Herself. You can think of us as kindling for the Rapture.