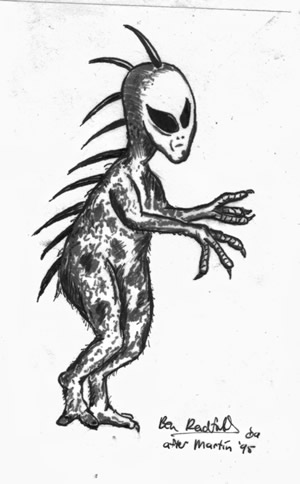 Q: What is a chupacabra?
A: The chupacabra is the world’s best-known vampire after Dracula, and the third best-known mystery monster after Bigfoot and Nessie. Chupacabra means “goat sucker” in Spanish, and it is said to attack goats and other livestock, draining their blood. The monster appears in several different forms, depending on when and where it is reported.

Q: Is it spelled chupacabra or chupacabras?
A: Either way is correct; I chose chupacabra because it is more widely known, and because several prominent Spanish-language writers use that spelling.

Q: I heard news a while ago that a chupacabra mystery had been solved. Is this different?
A: Yes. In that case, one particular chupacabra carcass was identified through genetic testing. In fact, that was only the latest in a series of “chupacabras” that have been identified. This book goes beyond just one dead animal and solves the entire chupacabra mystery, including its origins, folklore, and vampirism.

Q: There are other books and Web sites and authors that have written about the chupacabra mystery. What makes your information any better than theirs?
A: Careful research—and lots of it. It is true that a lot has been written about the chupacabra, since it’s known around the world. But much of the information out there has been simply copied and repeated from other sources, without the authors bothering to do any real investigation or research. I not only interviewed dozens of people for the book—everyone from forensic medical examiners to chupacabra carcass owners—but also personally investigated nearly every sighting, and traveled to Puerto Rico and the jungles of Nicaragua in search of information about the creature. I solved the fifteen-year-old mystery of the chupacabra, not necessarily because I’m smarter than other writers, but because I devoted far more time and research.

Q: What about the strange looking, four-legged animals they keep finding in Texas? Are those chupacabras?
A: There are some ongoing efforts to find and study a few strange Texas canids and “Texas blue dogs.” But there is little or no evidence of any link between the animals and the chupacabra. As the book describes, the Texas chupacabras keep being identified as known animals.

Q: I just heard about a new, weird animal they found—is it a chupacabra?
A: Possibly, but—if history is any guide—probably not. Any newly-discovered unidentified animals (alive or dead) can be examined and compared to a checklist that appears as Appendix 2 in the book, “How to Identify a Chupacabra.”

Q: How long did you spend researching this book?
A: I investigated the chupacabra over the course of about five years. Because of my previous experience investigating lake monsters around the world (for my 2007 book Lake Monster Mysteries: Investigating the World’s Most Elusive Creatures), I had a lot of experience in doing archive research, interviewing eyewitnesses, and that sort of thing. I traveled around New Mexico, Texas, Nicaragua, Costa Rica, and Puerto Rico in my research. For more on what my research involved, see the section “Solving the Mystery.”

Q: Is it true that some people believe that the chupacabra creatures are part of a government conspiracy?
A: Yes. In fact, information and speculation about the chupacabra are riddled with conspiracy theories. One of the most common beliefs about the chupacabra is that it was created as the result of top-secret genetics experiments by the U.S. Government. Some fundamentalist Christians also believe that the monster is a sort of “living weapon” created by the military for use against America’s enemies. In both cases you have a sort of Frankenstein / “mad science run amok” theme.

Q: Why did you spend so much time and effort on the chupacabra? What’s so special about this particular monster?
A: The chupacabra drew my interest for a number of reasons. First, it is an international mystery, and is known all over the world as the best-known “mysterious creature” after Bigfoot and the Loch Ness monster. I’d investigated many lake monster and Bigfoot sightings before, but nothing so broad in scope. Second, I was intrigued because the monster is so recent—it’s been around for less than 20 years. Third, the chupacabra is the only monster that is said to have left carcasses and remains; there are no known Bigfoot or Nessie bodies, but there are about a half-dozen alleged chupacabra bodies. This gives us a chance to evaluate the evidence with modern science and high-tech genetic tests. And lastly, the chupacabra is a vampire and—unlike Bigfoot or Nessie or any other supposed cryptozoological creature—it supposedly drinks blood. This was far too fascinating a mystery for me to just ignore; I wanted to be the first person in the world to fully and definitively solve the chupacabra mystery. And, after lots of time and effort, I am.

Q: So are you saying that the chupacabra mystery is solved?
A: Yes, I believe so. I think that anyone with an open mind who reads the evidence and arguments in my book Tracking the Chupacabra will conclude that I’ve pretty well slain this vampire. Science does not operate on certainties, and it is theoretically possible that tomorrow, or next month, or next year someone will find a true, scientifically authenticated chupacabra. If that happens, I’ll be happy to add a new chapter to the book! If I haven’t solved it, I hope readers will come away knowing that I did my best, and put far more time and effort than anyone else. If nothing else, I hope to raise the bar for future monster researchers, to show what serious scientific paranormal (or unexplained) mystery investigation involves. methodologies. Readers can also find some information on the chupacabra in my previous book, Scientific Paranormal Investigation: How to Solve Unexplained Mysteries.

I structured my chupacabra book as a kind of real-life mystery novel. You have to understand that when I began researching the chupacabra, I had no idea where the investigation would lead. It might lead me nowhere, or it might lead me face-to-face with a terrifying vampire beast with glowing red eyes, a mouthful of bloody teeth, and the stench of sulfur. I followed up any and all evidence I could: eyewitness accounts, reports of blood-drained animals, dead bodies, and so on. I was determined that I would solve this mystery once and for all—by either proving its existence (for example with a live animal or compelling scientific proof), or by explaining all the evidence offered for it. I bring the reader along with me as I assembled each piece of the puzzle; some pieces were found in the Texas desert, other pieces were found in the jungles of Nicaragua, still others in a coroner’s office.