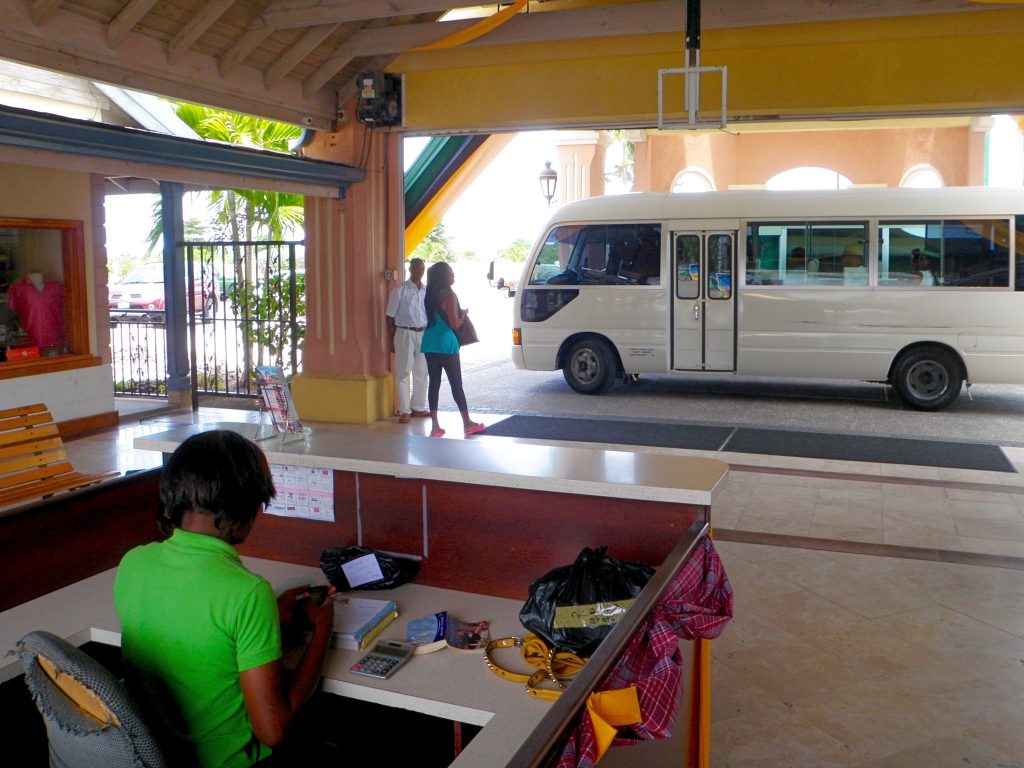 I was done. I’d arrived at the gated tourist mini-mall about half an hour earlier, and couldn’t take any more of the servile shopkeepers shilling shelf after shelf of schlocky tchotchke of unrivalled tackiness. I didn’t need a colorful coffee mug featuring a baked (and well-endowed) rasta firing up a spliff, nor a shot glass with a slightly off-kilter outline of Jamaica, nor a Bob Marley-scented candle (don’t ask). I considered getting a bag of criminally overpriced Blue Mountain coffee, but thought the better of it when I read the fine print saying that the contents were “no less than 30% Blue Mountain coffee beans,” which by my admittedly shaky math left a lot of percentage for non-Blue Mountain beans. It was the off-season, and only a handful of sunscreen-scented tourists ran the gauntlet.

Awaiting a return shuttle back to my hotel, with the low tropical roar of the Caribbean to one side and the famous Rose Hall plantation house looming on the hill facing us, I noticed that the young woman at the boxed-in greeting/information desk was reading a romance novel.

The type didn’t surprise me—more romance novels are sold each year than all other genres combined—but I noticed that it was an American Harlequin-branded novel. I wondered if this young black Jamaican woman was relating to the blonde, Caucasian characters in the book and on the cover. After all, it’s often said that people want to see representations of themselves—their bodies and their culture—in their entertainment, spawning perennial complaints about the lack of minorities in TV shows and films. Curious, I approached the desk. She looked up, prepared to offer a canned answer about what shops were where, when the shuttles ran, or where the nearest restroom was.

Instead I pointed to the book tented before her on the desk and asked, “Do you prefer American romance novels to Jamaican ones?” She smiled and said yes. I asked if Jamaican ones were available and she said yes, but that they aren’t widely read. (The previous day I’d been in two bookstores in the nearby city, Montego Bay, looking for books on local folklore and seen a handful of locally-published books with sensuous dark-skinned covers—surrounded by rows of Fifty Shades of Grey.) She said that it wasn’t that Jamaicans preferred non-Jamaican characters or settings, nor that North American romance writers were better than locals. Instead, she said, Jamaican books are more expensive than others because they are printed elsewhere and shipped here, thus subject to import taxes and shipping. (Harlequin novels are, too, of course: except for sugar and coffee most things are imported to the island. But they’re mass-produced cheaply, and economies of scale drive up the cost of Jamaican books.)

Also, she said with a shrug, “Jamaicans don’t read.”

“Yes, but I was forced to,” she replied. “As a girl I’d get a whoopin’ if I didn’t read. My mom had encyclopedias and she would make me read them to her, to learn.” I leaned forward on the wooden ledge, intrigued; I assumed her mother was a schoolteacher. “Was your mom a big reader?” I asked. She shook her head: “No, not at all. She didn’t finish high school. But she wanted me and the other children to learn to read, it was important.”

It was clear that the whoopin’ she referred to was not metaphorical; having spoken to a handful of Jamaicans I got the distinct impression that corporal punishment was widely practiced. She’d actually get smacked for not reading, not learning. “I love reading now,” she hastened to add. “I’m glad she made me read, I love to read the Twilight books, Harry Potter, all those.”

I was in Montego Bay for a television shoot; a producer from a show called The Dead Files (which airs on The Travel Channel) brought me out to do an on-camera interview about an investigation I’d conducted into Rose Hall, a former slave plantation said to be haunted by the ghost of Annie Palmer—the White Witch of Rose Hall. It’s one of the best-known mysteries in the Caribbean, a sordid tale of slavery, sexual perversion, voodoo magic, multiple murdered husbands, and bloody revenge. I’d done historical and on-site research solving the mystery; it can be found in Chapter 12 of my 2010 book Scientific Paranormal Investigation: How to Solve Unexplained Mysteries.

Back at my hotel after the shoot I’d spent the previous night reading a memoir titled Incidents in the Life of a Slave Girl, by Harriet Jacobs, who was born a slave in 1813 North Carolina and eventually escaped to freedom in 1842. It’s an unusual first-hand account of slavery during that time—rare because most slaves were illiterate; in fact in 1830 the North Carolina General Assembly passed a law making it illegal for anyone to teach a slave to read or write, and the penalty was severe: “If a white man or woman, be fined not less than one hundred dollars, nor more than two hundred dollars, or imprisoned; and if a free person of color, shall be fined, imprisoned, or whipped, at the discretion of the court, not exceeding thirty-nine lashes, nor less than twenty lashes.” As for slaves, “if any slave shall hereafter teach, or attempt to teach, any other slave to read or write, the use of figures [numbers] excepted, he or she may be carried before any justice of the peace, and on conviction thereof, shall be sentenced to receive thirty-nine lashes on his or her bare back.” Similar prohibitions enforcing slave illiteracy were found elsewhere at the time.

This practice, along with the history of slavery intimately associated with the country, was fresh in my mind as I heard the young woman tell her story. Most blacks in Jamaica are the descendants of African slaves brought to the island beginning in the 1500s by Portuguese to work on sugar plantations. I didn’t ask, but it’s very likely that her relatives—perhaps as recently as her great-grandfather—were slaves.

An irony dawned on me. The discipline meted out by a parent, of course, is very different from the discipline meted out by a slave owner. However there are parallels, and the ironic contrast of a mother giving her child a beating for not reading and improving herself was impressed upon me, especially coming from a community who in earlier days may have at one time been beaten for learning to read and write. Many American children only grudgingly learn to read and write, and after graduating high school never read for pleasure or work. They’re not illiterate; they can read food labels, government forms, bills, and day-to-day information. But beyond that, they pretty much don’t read—just as she said most Jamaicans don’t read. A generalization, to be sure, but one with more than a grain of truth to it.

I saw this first-hand years ago when I worked with the Literacy Volunteers of America teaching adults and non-native speakers to read; in most cases the clients grew up in households where reading was neither valued nor encouraged. I was fortunate to grow up in a literate home where newspapers, books, and magazines could be found, but many people do not have that benefit. I felt a strange literacy-based kinship with this young Jamaican woman and her mother. I pictured her as a young girl in their small house in the island’s rural mountains reading encyclopedias (which are written at a far higher reading level than anything you’ll find in most classrooms) aloud to her mother and siblings, tripping over the polysyllabic words—and in the priceless process learning about everything from antelopes and architecture to zoology and zymurgy. She grew up to be a bright, personable, intelligent, and well-spoken young woman.

As a reader, writer, and media literacy advocate I of course value literacy, and we were both grateful that her mother did as well—even if it took the threat of a whoopin’ to enforce it. I asked her what she wanted to do in the future, and she said she was planning to get a degree in business administration, a natural and lucrative career for a booming tourist island. I heard my hotel shuttle arriving behind me, but before I left I told her I was sure she was going to be an important and successful professional some day. She smiled confidently, sat upright in her chair, and turned back to her romance novel.