As the country waits to see what becomes of Supreme Court nominee Brett Kavanaugh pending the results of an FBI investigation, one thing has become clear: Whether or not the Senate believed Dr. Christine Blasey Ford’s accusations against Kavanaugh, most of America does.

In a PBS Newshour / Marist poll taken September 22 to 24, when asked, “Who do you think is telling the truth about what happened at the party in high school?” (one-third, 32%) said they believed Ford, with just over a quarter (26%) saying they believed Kavanaugh. The remainder, 42%, said they were unsure.

Another poll, from YouGov, found that 41% thought Ford was “definitely” or “probably telling the truth,” compared to 35% for Kavanaugh. About a quarter were unsure about both. 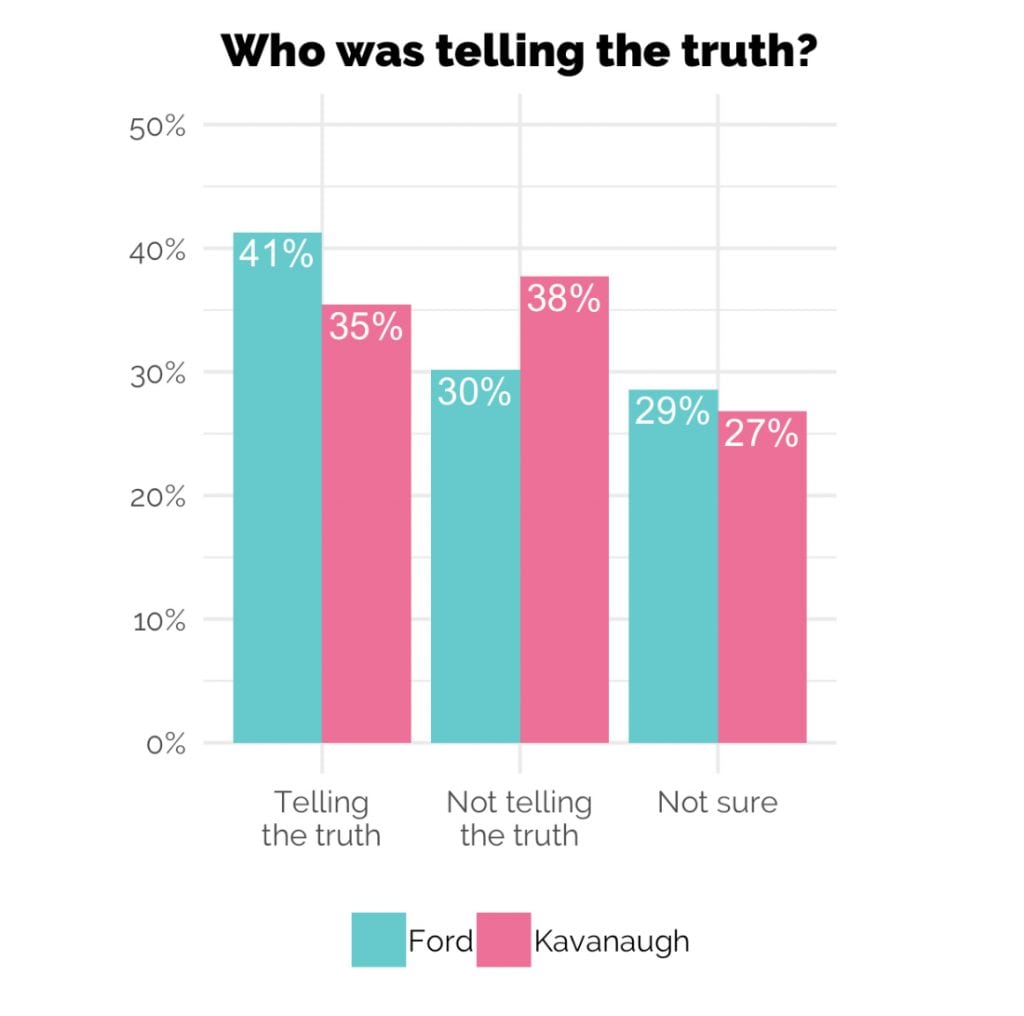 There is enough ambiguity in what happened for people on either side to be unsure. The “not sure” category is probably the most honest answer in this and other similar cases, given that none of them have been fully investigated, and opinions rest on political bias, whim, news and social media reports (and not, for example, evidence offered at a criminal trial). As CNN legal analyst Page Pate noted, “I think there is a real doubt about what happened at that house 36 years ago. That doubt would prevent Judge Kavanaugh from being convicted of a crime based on these allegations. But the same doubt may be enough to keep Judge Kavanaugh off the Supreme Court.”

That multiple polls show the public supports Ford over Kavanaugh may be surprising in a social media milieu where divisions are highlighted as a matter of course, but the same pattern holds true when you examine results from recent polls about sexual harassment and assault accusations. In every case the majority of people believed the accusers, and in most cases more men than women believed the accusers:

Q: Do you believe the women’s sexual assault accusations against Bill Cosby?

Q: Do you believe the women’s sexual accusations against Roy Moore?

Q: Do you believe the women’s sexual accusations against John Conyers?

Q: Do you believe the women’s sexual accusations against Charlie Rose?

Q: Do you believe the women’s sexual accusations against Al Franken?

Q: Do you believe the women’s sexual accusations against Harvey Weinstein?

70% of men and 55% of women believe Weinstein’s accusers; 2% of men and 4% of women disbelieve the accusers, the balance said not sure or didn’t have enough information to say.

Q: Do you believe the women’s sexual accusations against President Trump?

45% of men and 44% of women believe Trump’s accusers; 23% of men and 14% of women disbelieve the accusers, the balance said not sure or didn’t have enough information to say.

Q: Do you think that the allegations that Donald Trump made unwanted sexual advances against women are mostly true or mostly not true?**

Why is there a widespread belief that accusers are doubted by default? Part of it is the often-insensitive way in which accusers are treated; the hearings of both Anita Hill and Christine Ford are Exhibit A, but one can also see it in the many personal stories that have emerged in the past few weeks with hashtags such as #WhyIDidntReport.

There’s also the loudness factor, in which the most belligerent people and comments (such as those by Lindsey Graham and Donald Trump, for example) are given far more attention than those by more restrained, less emotional colleagues. The most extreme voices are often the most quotable ones.

The media also plays an important role. This is because the news media often engage in a sort of false equivalence or false balance, for example presenting “both sides” of an issue as equally valid, popular, or important. This often happens in topics such as in “debates” about creationism, global warming, or vaccine dangers, in which a scientist and an activist will both be presented on equal footing when in fact the evidence overwhelmingly points to one position, and the other represents a minority point of view. (For more on this see chapter 3 in my book Media Mythmakers: How Journalists, Activists, and Advertisers Mislead Us.)

It also happens in topics that spawn “national conversations,” especially about hot-button issues involving gender, race, and other social justice issues. The news media have a vested interest in highlighting conflict. While it certainly is true that Americans are divided about this issue—as they are about many issues—it’s not as if half of America is passionate, angry, and certain that Ford’s account is accurate and truthful, while the other half is equally passionate, angry, and certain that Kavanaugh is falsely accused. Many are unsure, and the majority tend to believe the accusers, not the accused.

Of course there is more to seeking equality and justice than just believing the accusers, but it’s an essential—and to many survivors, vitally important—first step. While it’s clearly true that many women who come forward with accusations are doubted and challenged, these polls and surveys suggest that in most cases when women come forward, they are in fact believed by the most of the public. This is good news, and should be reassuring for victims who may be reluctant to report their attacks. The public is with Ford, but whether or not the FBI will uncover disqualifying information in Kavanaugh’s case remains to be seen.

2 Responses to “Polls Show Most Americans Believe the Women”