Q&A About ‘Investigating Ghosts” and Writing

I recently was interviewed about my latest book, and my writing process. Here’s part one of the interview: 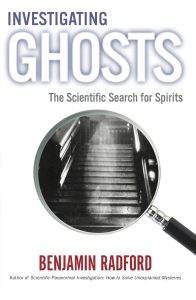 Investigating Ghostsis an in-depth look at the scientific attempts to contact the dead, from historical, cultural, and folkloric perspectives. From Shakespeare to the Victorian era to modern-day ghost hunting, people have always tried to find ghosts, and this is a look at their methods and how to bring science to them. I’m open-minded but skeptical.

This book is a culmination of about 20 years of research and investigation into the subject, and it’s probably one of the broadest topics I’ve written about. My previous books were often on narrower topics (such as New Mexico mysteries, the chupacabra vampire, and evil clowns) which allowed me to do a deep dive and analysis into them. But with ghosts, there’s an enormous amount of information I needed to tackle, from early ghost-based religions such as Spiritualism to ghost folklore, the psychology of a ghost experience, ghost hunting devices, ghost photos, the scientific process, and so on. In all these cases I wanted to bring something new to it, to not just copy and paste information or third-hand sources but give readers factual, science-based information. That’s why there’s eight pages of references; it’s not just a book of spooky, told-as-true ghost stories, but evidence-based analyses, including my own investigations. Even with all that, I couldn’t get everything into 320 pages.

Throughout the book I describe my first-hand investigations, including many here in New Mexico. I’m not just an armchair investigator! I love to get out in the field, go to haunted locations, interview witnesses, examine evidence, and try to figure out what’s going on. So I enjoyed describing some of the investigations, for example at the KiMo theater, at the Albuquerque Press Club, courthouses in Santa Fe and Espanola, the tiny town of Cuchillo, and so on. I have also done haunted house investigations for TV shows, in Los Angeles, Jamaica, Canada, and other countries. It’s part memoir, which was fun, and I’m especially pleased it won the New Mexico/Arizona Book Award. 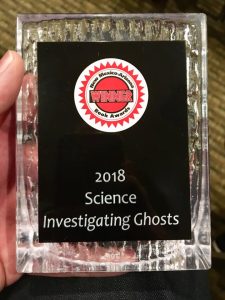 Investigating Ghostsis actually a follow-up to a previous book, titled Scientific Paranormal Investigation: How to Solve Unexplained Mysteries, which came out in 2010. In that book I cover, well, pretty much what the title states: How to investigate—and more importantly, solve—seemingly unexplained mysteries. I cover a wide variety of phenomenon, including crop circles, lake monsters, psychic detectives, and ghosts. But I realized that ghost are so popular, and such an often-investigated phenomenon, that they really deserved their own book. There really are so many different aspects to ghost investigation (photos, experiences, so-called EVP or ghostly voices, and so on) that I couldn’t do it justice in just a chapter or a few articles. Plus I kept meeting well-intended amateur ghost hunters who were going about it in completely the wrong way—often influenced, unfortunately, by “reality” TV shows—and honestly I felt badly for them. This book is partly an attempt to help sincere ghost investigators, whether skeptic or believer, to improve their methods so that, if ghosts do exist, they can be proven. Or, by the same token, if ghosts aren’t real, we can help prove that, too.