We’ve all seen it on social media, especially Facebook. Some friend, or “friend,” or friend of a “friend,” posts a news story. Because it’s social media, the story is often selected (by human nature and algorithms) for its outrage factor. Amid the kitten videos and funny or cute memes, the news stories most likely to be shared are those that push people’s buttons—sometimes good news but more often bad news, tragedies, disasters, and the obligatory political outrage du jour.

You read the headline and may Like or Share, but in the back of your head the news story may seem vaguely familiar … didn’t that happen years ago? In a world of twenty-four-hour news, it’s hard to remember, and on some level a lot of the stories sound (or are) basically the same: Someone killed someone in a gruesome way or because of some toxic motive. Trump said something that provoked (real or feigned) outrage. Some country implemented some new law affecting minorities. And so on. Even if it happened before, it must have happened again.

Not long ago you could be reasonably certain that news was in fact news—that is, it happened recently and was “new.” But one of the consequences of getting news filtered via social media (as more and more people do) is that news organizations are further and further removed from their audiences. On television, in newspapers, or on news websites, the information is direct; you’re reading what a journalist (who presumably has some credibility to maintain) has to say about some given topic. News editors as a rule value breaking news, not old news. Unless it’s a special case (such as an anniversary of some significant event) or a retrospective, old news very rarely appears on broadcasts or on reputable news sites except in clearly-designated archives.

On social media, of course, news is filtered through our peers and friends. Often it’s legitimate “new news,” but increasingly it’s old news misrepresented, mistaken for, or disguised as new news. This is a media literacy challenge, because old news is often fake news and shared by well-meaning people. News sharing on social media is less about the content of that story than it is about symbolic endorsement, or what’s been called virtue signaling. Liking or Sharing a news story doesn’t necessarily mean you’ve read it—much less understand it or can intelligently discuss it—but instead it’s often used as a visual badge representing your social and political views. If you’re concerned about environmentalism, social justice, immigration, politics, or anything else you can remind everyone where you stand on the issue. It’s sort of like bumper stickers on the information superhighway. 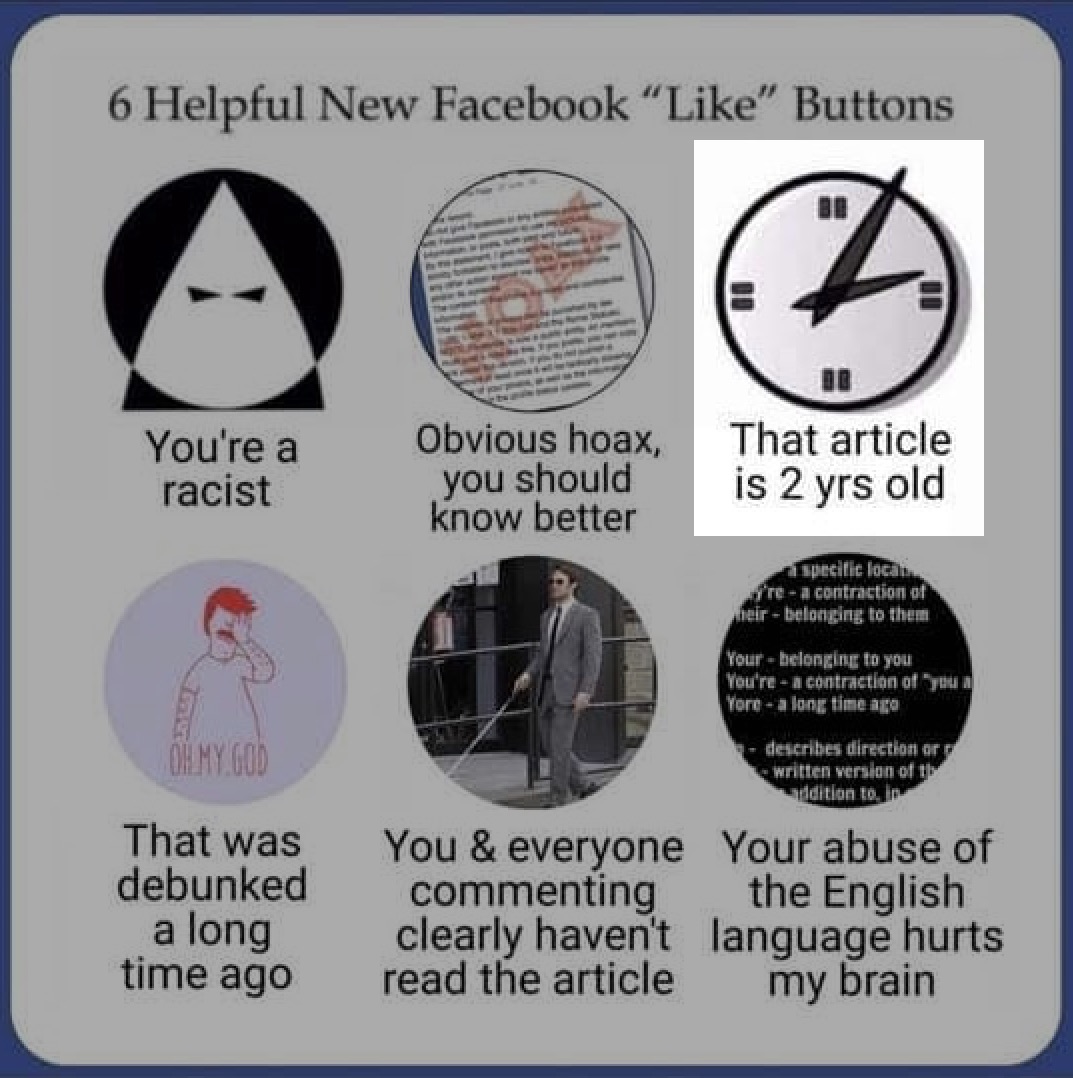 The Epistemology of Fake News

To understand why old news is often fake news, let’s take a brief look at epistemology, or the nature of knowledge. All of science is subject to revision and further information; new studies and research may always throw “facts” into the “former facts” category.

Science does not deal in absolute certainties, and it is possible—despite overwhelming evidence to the contrary—that smoking does not cause lung cancer, for example, and that humans are not contributing to global warming. Decades of research have established a clear causative link between these variables (smoking and lung cancer, human activity and global warming), but they are not 100 percent definitive; nothing in science ever is.

Facts are only true at a certain time and under a certain set of circumstances. But the world is constantly changing, in ways both miniscule and dramatic, thus a fact about the world is accurate as of that time. It was once a fact that there were forty-eight states in the United States, but that no longer a fact; there are now fifty (including commonwealths). It was once a fact that the capital of the African state of Rhodesia is Salisbury; but Rhodesia no longer exists, and therefore that fact is a former fact, or more accurately the fact has been slightly changed to maintain its accuracy: “The capital of Rhodesia was Salisbury” remains a true fact.

The point is not to revel in pedantry—though I’ve been accused of doing as much—but instead to note that many facts that we have incorporated into our knowledge base have changed and may no longer be true. That Texas is south of Canada has been true my entire life, but that my friend Amy is unmarried has not (she got married a few years ago). There are countless other examples, and they show why “is” and “was” are important distinctions, especially when it comes to news stories. Rehashing old news as new blurs the line between the two, sowing unnecessary confusion about what is true and what was true at one point (but may no longer be).

This does not at all suggest that facts are subjective, of course, or that each person (or political party) is entitled to their own facts. But keeping in mind the important caveat that many people don’t read past the headline of a given news story, we see that recycling headlines makes misleading people likely. People don’t constantly update their knowledge about the world unless they have to, and thus typically rely on old (often outdated) information.

Samuel Arbesman discusses this issue at length in his 2012 book The Half-Life of Facts: Why Everything We Know Has an Expiration Date. He notes that “Ultimately the reason errors spread is because it’s a lot easier to spread the first thing you find, or the fact that sounds correct, than to delve deeply into the literature in search of the correct fact … . Bad information can spread fast. And a first-mover advantage in information often has a pernicious effect. Whatever fact first appears … whether true or not, is very difficult to dislodge … . It’s like trying to gather dandelion seeds once they have been blown to the wind.” The best way to stop the spread of misinformation is Skepticism 101. “There is a simple remedy: Be critical before spreading information and examine it to see what is true. Too often not knowing where one’s facts came from and whether it is well-founded at all is the source of an error. We often just take things on faith.”

We all know that recycling is good in the context of natural resources, for example. Good ideas can be recycled, because, as they say, there’s nothing new under the sun, and what works (or doesn’t) at one point in time, in a specific set of circumstances, may work (or fail) at another time under a different set of circumstances. At one point, for example, developments for electric cars were prematurely proclaimed dead (as seen in the 2006 documentary Who Killed the Electric Car?) but today is a growing business. News stories are a different beast.

The news media go out of their way to emphasize bad or alarming news (“if it bleeds, it leads”), but social media compounds the problem. For the past year or two, I’ve noticed news articles from reputable sources shared on Facebook and other social media as if they were recent. Articles from 2015 and 2016 have been revived and given a new life, often shared and spread by people who didn’t know (or care) they were recycling old news.

This is misleading because the posts rarely if ever include the date, instead showing merely the headline and perhaps a photo and the first sentence. So when unflattering events about Hillary Clinton, Donald Trump, or anyone else circulate, they are likely to take on a second or third life. Sometimes the events themselves are clearly dated (tied, for example, to election results), but it’s often political stories putting a prominent person in a bad light that tend to get recycled. A news story about a natural disaster is unlikely to get intentionally seen again, because no one benefits from fooling others into thinking that another devastating earthquake recently hit Mexico, for example.

But a news story about a single specific incident of, for example, a Muslim group killing innocent Christians, or vice-versa, may be revived multiple times over the years, giving the illusion that the events keep occurring when in fact it may have been a one-time event. News organizations would not intentionally present past events as recent news, precisely because people assume that what they’re seeing in news feeds is both timely and important. Social media users, on the other hand, have no qualms about sharing old or misleading content if it promotes some pet social or political agenda. To conservatives, old news stories that make Obama or Clinton look bad are just as relevant and useful today as they were nearly a decade ago. To liberals, old news stories that highlight Trump’s corruption or incompetence are equally useful. (The Russians, for their part, are just happy to stir up divisiveness.)

Information can always be weaponized, but old news is by its nature often weaponized; it’s recirculated for a reason. It’s not information for the sake of knowledge; it’s information that misleads for a purpose and shared by those trying to support a greater good.

You can read the rest HERE!