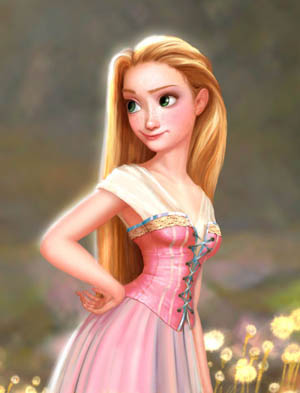 Tangled tells a re-envisioned version of Rapunzel, in which a magical plant that falls from the sky is found and coveted by a woman who uses its powers to stay perpetually young. However one day in a nearby kingdom, the pregnant queen is having a difficult birth, and the royal guards are sent to find the miracle plant. They do, and take the magic to the queen, who uses it to give birth to a cute baby princess named Rapunzel. The peasant woman who had previously used the magic is not happy about this, and somehow figures out that the infant princess’s hair can be used to keep her young. She then steals Rapunzel and places her in a tower all alone and adopts her as her own, visiting her periodically to rejuvenate.

Fast-forward nearly two decades. Rapunzel, on the verge of her eighteenth birthday, trailing a mile of golden locks, and apparently showing no signs of psychological trauma from having spent all of her life alone and imprisoned, remains unaware that she is in fact a stolen princess from a nearby kingdom. She pines away in boredom and loneliness—until a handsome rogue thief appears in her tower and, after a series of misadventures, captures her heart. He agrees to take her to the kingdom if she will return a crown he’s stolen and let him get away.

The film is in 3D, as is all the rage these days, and the scenes are nice to look at. The scenes really show depth, though I wish the plot had as much depth. It’s kind of a non-sensical story, with strange plot holes galore. I guess I should know better than to challenge logic in fairy tales, but the movie never explains how Rapunzel realizes that she’s the missing princess (which is after all key to the whole story). Furthermore, it’s not clear why the queen’s life is any more valuable than the peasant woman’s. After all, even though Rapunzel’s “mother” is clearly evil and manipulated Rapunzel for her own purposes, the queen had no more right to use the magic for herself than she did. And later when Rapunzel enters the kingdom—knowing that she has the magical ability to cure illness and injury, you might think that this kind-hearted soul might head directly to the hospital to heal the sick and injured. Instead she keeps the power a secret; perhaps she should take a lesson from Spider-Man: With great power comes great responsibility. Ah, the selective morality of fairy tales!

I was looking forward to Tangled. Fractured fairly tales are of course nothing new; they’ve been around since at least the 1960s (in the Rocky and Bullwinkle Show). But there’s little new in this mediocre fairy tale retelling. The songs—about a dozen in all—are annoying and forgettable, though kids might like them. Tangled is passable entertainment for undemanding teens and pre-teens, though adults may find it lacking.