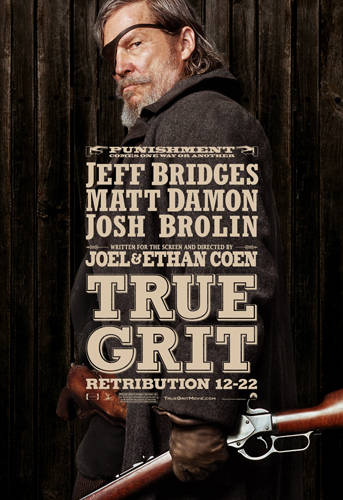 The new film True Grit, like the 1969 Western starring John Wayne, tells the story of a precious and precocious 14-year-old girl named Mattie Ross (Hailee Steinfeld), who hires crusty, one-eyed lawman Rooster Cogburn (Jeff Bridges) to help her hunt down Tom Chaney, the man who killed her father. They are soon joined by a Texas Ranger named LeBeauf (Matt Damon), who is already on Chaney’s trail.

Much of the dialogue came from the novel by Charles Portis—an unfortunate screenwriting decision by the writer/directors. The Coen brothers can write good dialogue; no one who has seen No Country For Old Men can deny that. But they are a little too in love with their (and Portis’s) words, much as Quentin Tarantino and Kevin Smith—bless their awesome indie hearts—often sacrifice credibility for literal showmanship.

Throughout the film, Mattie’s dialogue is jarringly out of character. Could a fourteen-year-old girl speak the way Mattie does? Certainly, it’s possible. By the same token, the Black adolescent stableboy she takes a horse from could possibly speak in Shakespearean Early Modern English, as could the clerk at your local gas station. (For the record, the film Juno annoyed me for much the same reason.) Those who saw the HBO series Deadwood heard very different (and, experts stated, much more realistic) dialogue from around the same milieu.

The plot didn’t hold much sway for me either. I never thought the original True Grit was that great, and this remake didn’t improve the plot. It’s all tired retread: a gruff loner on a mission is befriended by a determined, sweet-tempered younger sidekick who eventually worms his or her way into our hearts. Yep, it’s Shrek and a billion other films. Just because True Grit is packed to the gills with clichés doesn’t make it a bad film. Lots of fine films contain threadbare clichés, but the best ones rise above them. True Grit relies heavily on Bridges’ prodigious talent, but even that isn’t enough to save the film from mediocrity.

Just as Mattie’s dialogue rings false, much of the plot does as well. Before Mattie selects Cogburn, she is offered her choice of three trackers to help find her father’s killer, whose death she keeps reminding us motivates her. Mattie is depicted and played as sharp and savvy, yet she inexplicably does not choose the man suggested as the best tracker. This is of course necessary to launch the plot, but it does raise the puzzling question of why, if finding her father’s killer is her life’s burning mission, she doesn’t choose the best person for the job. One wonders, if she and Cogburn hadn’t found him at the end of the film, if she would have regretted not hiring the best tracker. There’s various other plot silliness, such as both Cogburn and LeBeauf stating that they think Chaney is long gone and will never be found, yet conveniently (and coincidentally) Mattie stumbles across him the very next morning at a stream only a few yards from their camp. This is a world in where the bad guys are knocked unconscious from the slightest blow (or killed by a single shot), while the heroes shoot straight and feel fine despite mortal bullet wounds.

Technically, True Grit is a fine Western. The cinematography is excellent, the scenery drips with desolation and death, the direction is assured, and the period detail is excellent. The acting by Bridges and the rest is uniformly excellent, and Steinfeld’s would be great if she wasn’t hampered by a script that has her saying lines that would better fit a middle-aged college professor.