I was a guest last month at New Mexico’s premiere science fiction and fantasy convention, Bubonicon. I gave a talk titled Contacting the Dead: Séances From the Victorian Era To Modern Times, described below

Though TV shows like Ghost Hunters have raised the profile of ghost hunting, there’s nothing new about seeking out spirits of the dead. For millennia people have tried to communicate with the deceased, using everything from chalkboards to Ouija boards to EVP (electronic voice phenomena). Focusing on the 1800s through today—including early mediums, the Spiritualist movement, and files from England’s Society for Psychical Research—writer and investigator Ben Radford discusses the theories and techniques behind attempts to speak to the dead. Fans of SF, fantasy, horror, and occult history will enjoy this informative and entertaining historical look at a century and a half of attempts to contact the afterlife. 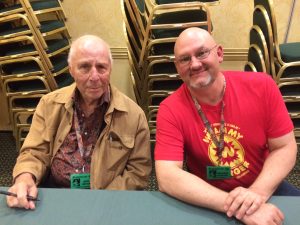 Meeting of the Bens

At the autographing session I was seated next to 6-time Hugo Award winning sci-fi writer Ben Bova. We chatted for about 15 minutes; he was engaging and delightful, recounting stories of working with his friends Isaac Asimov, Arthur C. Clarke, and other greats of the golden age of sci-fi. Fans brought piles of his books and old magazines for him to autograph. I joked with him that having to sign so much was a penalty for being prolific and said I’d only written nine books (compared to his hundreds of credits) and he encouragingly replied, “That’s nine more than most people.”