The emailed press release I got last week began:

“PETERSBURG, Ky., Sept. 26, 2017 – Since Darwin’s ‘On the Origin of Species’ was published in 1859, entirely new fields of science have been born and matured-fields which hold the keys to the origin of species. With a Ph.D. in cell and developmental biology from Harvard, Dr. Nathaniel Jeanson is uniquely qualified to investigate what genetics reveals about origins, and has released his findings in the book ‘Replacing Darwin: The New Origin of Species.’ Due from Master Books next month, ‘Replacing Darwin’ offers a revolutionary approach to the study of origins with a potential impact as big as Darwin’s.”

It certainly sounded potentially intriguing, so I kept reading:

“‘On the Origin of Species’ is considered one of history’s most influential books and has become the foundation of evolutionary biology. This new work asks readers to consider: If Darwin was looking at the same evidence today using modern science, would his conclusions be the same? ‘Since 1859, we’ve had time to reevaluate [Darwin’s] picture. A global community of millions of scientists can pool their resources and build on one another’s work,’ Jeanson states. ‘The cumulative observations of these scientists have built an unprecedented body of knowledge on the diversity and operation of life.’ In ‘Replacing Darwin,’ Jeanson argues that this knowledge has rewritten the long-standing explanation for the origin of species. Though a work of scholarship, ‘Replacing Darwin’ is accessible. Jeanson uses an analogy to which all readers can relate – a jigsaw puzzle – to illustrate the quest for the answer to the mystery of the origin of species. He contends that Darwin reached his conclusions with only 15 percent – or less – of the total pieces of the puzzle. In addition, Jeanson argues that Darwin tried to piece together his findings without the constraints of edge pieces and corner pieces. If an actual jigsaw puzzle were put together under these conditions, would the participants have had any chance of success?”

This is where some red flags began poking up and waving around–not wildly, but just enough to raise my skeptical sense that something was amiss with this upcoming book by Harvard biologist Nathaniel Jeanson. For some reason the jigsaw puzzle struck me as odd, but I couldn’t put my finger on why. I kept reading.

“Jeanson’s book begins its account after the publication of the first edition of Darwin’s book in 1859. Several years after Darwin made his bold claims, the Austrian monk Gregor Mendel, who studied inheritance and the origin of traits, published his discoveries, which remain textbook science to this day. In the early 1900s, American scientist Walter Sutton connected chromosomes to Mendel’s decades’ old discoveries. The next question for the scientific community was how specifically the chromosomes contained the information for traits. The search led to DNA and James Watson’s and Francis Crick’s famous discovery of the double helix in 1953.”

So far so good; the text wasn’t saying anything obviously scientifically incorrect, but it did seem to be bland and dancing around something. I just wasn’t sure what… I read on:

“Jeanson concludes that there is much more to be discovered in this field, with the genetics of millions of species yet to be determined and the mutation rates of each of these species to be measured.”

Okay, sounds right. I’m certain that no geneticist would disagree with Jeanson that “there is much more to be discovered in this field”; the same is true of virtually any scientific field. But the lede was buried in the very last two sentences:

“He expects that connections will be found between many other species within a family (or genus), but that species from different families (or genera) reside in completely different puzzles sharply disconnected from one another, rather than pointing to universal common ancestry. With this new book, the scientific revolution to overturn Darwin may have begun.”

Hold on there. What exactly does “rather than pointing to universal common ancestry” mean? The implicit answer is in the next line: “With this new book, the scientific revolution to overturn Darwin may have begun.” No common ancestor? Overturning Darwin?

Sounds a lot like Creationist Bullshit to me… and I realized why the jigsaw puzzle struck me as odd: it reminded me of bogus creationist analogies, such as the watchmaker analogy suggesting that a found watch must imply an intelligent designer.

But there was nothing in the press release that was explicitly Christian: no references to God, or the Bible, or intelligent design. It was all very subtle, just like “teach the controversy” suckers people into thinking there’s a controversy about evolution.

So I looked up the publisher. It was not Harvard University Press but instead something called MasterBooks.com. A few seconds poking around the website revealed a trove of creationist pseudoscience, most of them with innocuous, sciencey-sounding titles like Earth’s Catastrophic Past and Age of the Earth. 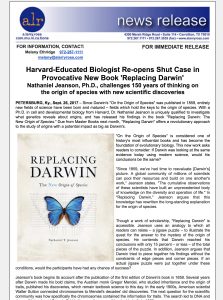 But there was also an ad for “Ken Ham Books and DVDs,” along with the MasterBooks “100% Faith Grower Guarantee,” which–whatever that means–is almost certainly as nonsensical as it sounds. I didn’t fall for this gambit, but I had to admit that the anti-science agenda was pretty well hidden. It took me about five minutes before I was sure what was really going on–and that’s probably about four minutes longer than most editors and journalists will give it. Jeanson and MasterBooks are hoping that enough of them order review copies and/or pass along the information about this potentially groundbreaking book without stopping to take a closer look at it.

In this age of social media and information sharing, it’s more important than ever to be vigilant of misinformation. That goes for bogus news stories, but also for creationist books masquerading as cutting-edge genetic science.