Meryl Streep gave a blistering 2017 Golden Globes speech that never mentioned Trump’s name but referred to the president as “a coarse blowhard.” 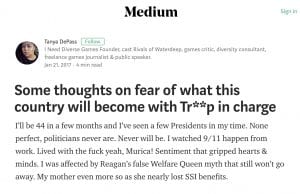 Others simply call him “Sin Nombre” (nameless in Spanish)—though I’d prefer “Hombre Sin Nombre” because it’s alliterative and references his infamous, inane “bad hombres” comment—though no one asked me. 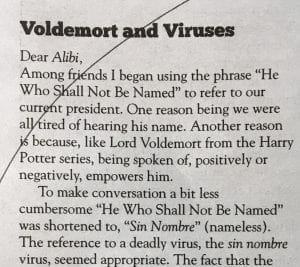 For a while some people avoided using Trump’s name on Facebook because the site’s algorithms would be more likely to send political advertisements for Trump to whoever wrote about him, though as his name became ubiquitous, the algorithms became less useful.

What’s behind the refusal or reluctance to say Trump’s name?

The Atlantic had a piece on this last year, noting that “When the late Gwen Ifill asked President Barack Obama why he had been avoiding saying ‘Trump,’ he replied, ‘He seems to do a good job mentioning his own name. So, I figure, you know, I will let him do his advertising for him[self]’…. Martin Luther King Jr.’s daughter Bernice King shared a widely circulated list to her Facebook page offering tips for resisting Trump. The top suggestion: ‘Use his name sparingly so as not to detract from the issues.’… Given the influence Trump’s name wields, snubbing it is an attempt to withhold some of that power while staking out higher moral ground, said Jenny Lederer, an assistant professor of linguistics at San Francisco State University. ‘In his case, especially, people feel like not repeating his name is [a way of] not speaking to the brand and the value system that goes along with his political ideology.’”

In The Encyclopedia of Superstitions, E. and M. Radford—no relation, probably—note that “In primitive thought, a man’s name was not merely a convenient label by which he could be distinguished from others. It was an integral part of himself, as important to him as, and indeed, moreso than, his arms or legs or eyes. Knowledge of it by another gave that other power over him… These beliefs survive in the custom, once quite general, of keeping a child’s name secret from outsiders until he had been baptized. To let it be known to any stranger… was to run the risk of witchcraft” (p. 244). In the Doctor Who universe, the titular doctor’s name is unknown (except to him or her, as the case may be, and a possible wife) and never spoken aloud in the series.

Often refusing to name a figure is done in deference to their awesome and potentially destructive power. The idea is that to say the name without sufficient reverence—or at all—is to risk drawing the person’s attention or wrath. In Roman Catholic exorcisms, knowing a demon’s name is considered an important part of the ritual and gives the priest power over the evil entity. Even saying the name of the Christian God is considered dangerous in some cases; hence mild exclamations such as “zounds!” were adopted from the archaic, quasi-blasphemic phrase “god’s wounds.” Similarly, in Jewish traditions the name “Yahweh” is too sacred to speak or even write, preferring the Almighty” or “our Lord”; even the word “God” is often written as “G-d.”

In the Harry Potter universe the villain Voldemort is referred to as “He Who Must Not Be Named” and “You Know Who.” In British fairy folklore there is a long tradition of avoiding speaking the word “fairy” aloud. They are variously referred to as “the good folk,” the “wee folk,” or just “the folk.” To do otherwise is to invite trouble.

Many or most people who refuse to use Trump’s name aren’t doing so out of reverence, of course. As the Atlantic piece notes, “When it comes to the current president, the refusal to use his name may be uniquely subversive because of the degree to which Trump has wrapped his entire worth, wealth, and fame up in those five letters.” Indeed, Trump seems remarkably impressed not only with himself but also with his own surname, which he considers to be his signature brand.

But has the anti-Trump linguistic revolt done any good? Is it a form of verbal slacktivism and virtue signaling? While refusing to speak his name may seem like a tiny act of “he’s not my president” defiance, it doesn’t seem to be an issue for him. Perhaps the biggest indication that some people’s refusal to say Trump’s name isn’t bothering him is the lack of reaction, especially on social media. Trump is famously thin-skinned about real and imagined slights, and has shown no qualms about taking to Twitter to blast his critics. Yet there’s been no stream of petty, pouty invective from our commander in chief wailing about his subjects’ lack of reverence for his name.

It could also be that Trump only cares about the loudest voices and (what he considers to be) his most vocal opponents, including “The Failing New York Times” and CNN, which due to journalistic editorial standards would not replace letters in Trump’s name with asterisks. As long as they spell his name right (and fully), he’s happy.