My recent blog is about the tragic shooting of Jazmine Barnes days before New Years, and how mistaken eyewitnesses and mistaken assumptions led to the search for a non-existent racist serial killer in Houston….

On December 30, 2018, a seven-year-old Houston girl named Jazmine Barnes was killed when a gunman drove up next to the vehicle she was in and opened fire on its occupants. Her mother, LaPorsha Washington, was wounded; Jazmine was struck in the head and died on the way to the hospital.

As the New Year’s celebrations went on, the police made the case a top priority, and the case made national news. The police did have some leads. Jazmine’s older sister and other witnesses offered a description of the shooter: a white male, thirties to forties, with a light beard wearing a dark hoodie and driving a red pickup truck. Police immediately issued a sketch based on that description, later followed by an image from a surveillance camera that showed the red truck driving away. 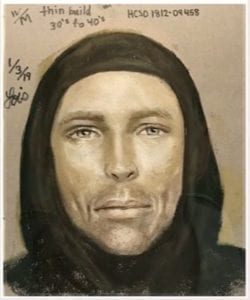 The case holds several interesting lessons for skeptics, including about investigation, statistics, the reliability of eyewitnesses, confirmation bias, and finding patterns where none exist.

The police began looking for suspects based on a probability profile, examining the statistically most likely suspects given the circumstances. For example most people are assaulted and murdered by someone they know, so if a person is found dead the police begin searching for suspects among relatives and acquaintances before casting a (much) wider net to include strangers. One aspect of Jazmine’s murder was especially chilling: it was seemingly random, the attack unprovoked by any known confrontation that too often escalate—such as over money, love, or something as mundane as a parking space—into violence.

Given the victim profile, statistically the most likely suspect was African-American, specifically a black male; more than 80 percent of all crime involves victims and perpetrators of the same race. Whites and African Americans of course can and do attack each other, but they are the exception, not the rule. Medical professionals adopt the same tactic to rule out the more likely causes of headaches or back pain, for example, before screening for rare diseases. As they say, if you hear hoofbeats, think horses not zebras.

Despite police saying they were exploring all possibilities about the motivation, many in the community quickly attributed it to a hate crime. Houston activist Deric Muhammad held a press conference outside a Harris County Sheriff’s Office and suggested that the death of Jazmine Barnes was the work of a white supremacist serial killer.

Muhammad linked the girl’s death to a previous shooting, on August 30, 2017. In that case a 21-year-old black man, A’vonta Williams, was shot by a white male driving a Ford F-150 truck. Williams survived, but police were unable to make an arrest in the case.

Muhammad suggested that police incompetence (or refusal to investigate) played a role: “If A’vonta Williams’s shooter had been found, would Jazmine Barnes still be alive?” The link between the two attacks seemed not only plausible but obvious, and Muhammad invoked probability and statistics: “What are the odds that two black families were fired upon by a white male in a pickup truck within a one-year time span on the same block? We’ve got to call it what it is: Black people are being targeted in this country. Black people are being targeted in this county. Black people are being targeted in this city. We are thoroughly convinced that the killing of Jazmine Barnes was race related.” Kisshima Williams, a relative of A’vonta Williams, agreed, saying “It has to be the same person. It’s too similar.” Muhammad was not alone; Rep. Sheila Jackson Lee implored those gathered at a rally for Jazmine, “Do not be afraid to call this what it seems to be: a hate crime.” If the crime was indeed random—as it appeared to be—racism seemed a plausible explanation.

The question Muhammad raised is a fair one, though the odds are difficult or impossible to calculate. The two shootings happened about six miles apart, and were in different vehicles (the 2017 shooting involved a gray, silver, or white truck pickup instead of a red one, and an AR-15 style automatic weapon instead of a handgun).