One common claim about Donald Trump is that he often says and does things not only for effect, but with the specific goal of distracting the public and news media from something else he wants to keep hidden. The claims have circulated for years, especially on social media; for example one Facebook post recently stated that “Trump’s quixotic attacks on immigrant children, Denmark, and American Jews are horrible, but even though we can’t ignore them, they are obviously meant to distract.”

While possible—anything is possible—it wasn’t clear what Trump’s statements and actions are “obviously” meant to distract the public or the news media from. While not a formal conspiracy theory, the claim demonstrates classic conspiracy thinking: that there must be some hidden agenda, some “real” reason why something happens, in this case why Trump would crack down on immigrants, pick a fight with Denmark, and opine that American Jews who didn’t support him were “disloyal.” (By implication this comment might suggest that Trump’s statements, positions, and actions were insincere and didn’t reflect his true values but were merely a shiny decoy.)

The claim essentially posits or assumes a correlation between Trump’s often wild, news-making statements and actions, and the existence of some potentially unsavory act or news story that does (or might potentially) involve Trump in some way. The claim is typically stated as a self-evident matter of fact, that “obviously” some devious (if transparent) distraction tactic is afoot. The idea merits a critical media literacy analysis, so let’s take a closer look.

First let’s examine Trump’s comments and actions. Virtually every statement or Tweet Trump issues is arguably newsworthy (whether that is in fact true has been the subject of legitimate journalistic debate). 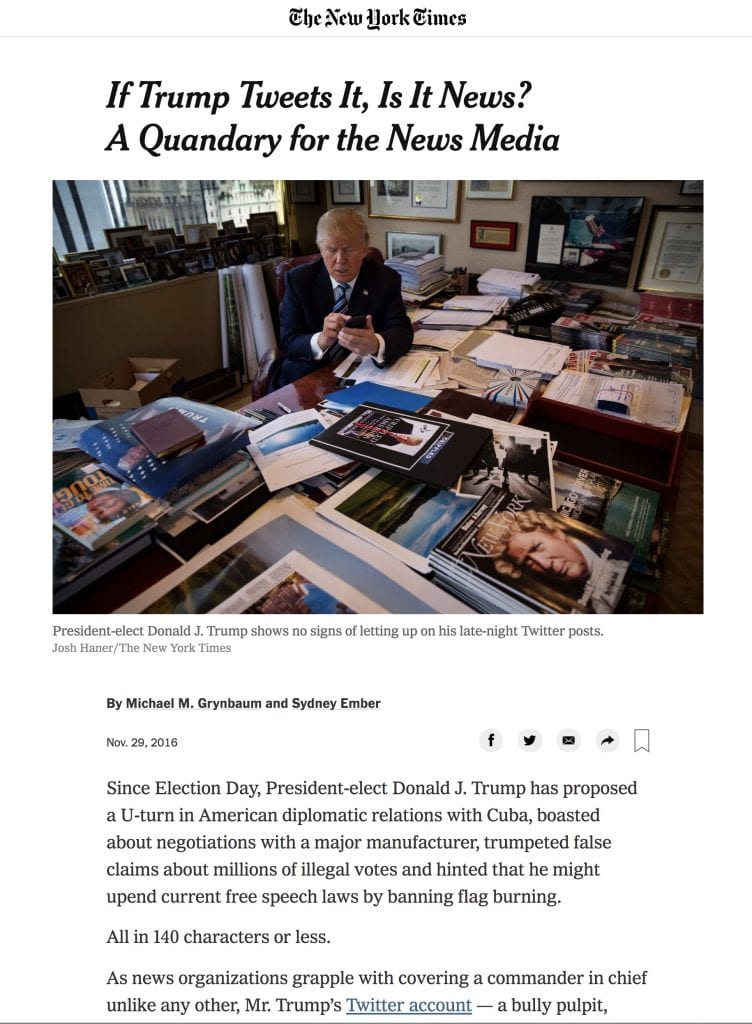 Trump’s statements are notable and reported on for many reasons, chief among them that 1) they reflect formal, official positions by the United States government; or 2) they’re factually and demonstrably false, misleading, or exaggerated; or 3) they’re bizarre, non-sequitur, and/or petty personal attacks. The news media rarely reported on the last two categories of statements by previous presidents for the simple reason that those presidents rarely made them. Therefore the sheer number of newsworthy statements by Trump are far higher than in the past—coming in some cases on a daily basis—and thus represent a huge pool of statements that could potentially be seen as having been issued as part of some distraction strategy.

Against this backdrop we have the second part of the equation, events and issues that are potentially (personally or politically) embarrassing or damaging to Trump. Once again we find a deep well of material. The Trump presidency—and arguably most of Trump’s adult life—has been characterized by a constant stream of realized and potential scandals of every conceivable type, including sexual abuse allegations, collusion with Russia, concerns about his mental health, obstruction of justice, hiring criminal or unfit officials for his administration, misogynistic comments, nepotism, taxpayer Secret Service expenses for his family’s travel, bankruptcies, dubious “bone spur” draft deferrals, mocking Sen. John McCain (even in death), racist and antisemitic statements, and dozens more. Many of these were not one-time issues but have dogged Trump for years.

Seeing hidden connections and causes is a common logical fallacy with a Latin name: post hoc ergo propter hoc (Latin for “after this, therefore because of it”). Because the human mind seeks connections, people often misattribute causes, thinking that “B happened after A did, so A must have caused B.” It makes sense, and it’s often true—but not always. It’s like saying “roosters crow before the sun rises, so the roosters must have made the sun rise.” Like a conspiracy theory, claims about the Trump Distraction Plan are not falsifiable and can’t be disproven.

The fact that Trump did or said something newsworthy (or outrageous) at the same time that some real or potential scandal looms over him is meaningless since he has always been mired in scandal, even before he was elected. Anything he says or does can be plausibly contrasted with some other contemporaneous issue he might conceivably want to distract from.

It’s important to note that if this indeed part of Trump’s master plan, it’s largely failing. Journalists tend to be a pretty savvy lot, and news organizations can cover more than one story at a time. The idea that there is a single spotlight that “the news media” train on a specific topic to the exclusion of other news stories is absurd. It’s true that a single reporter can usually only work on one story at a time, and that if a journalist is writing a piece about Trump’s offer to buy Greenland for example, he or she is not at the same time writing an in-depth piece about the effect that Trump’s trade war has on the American economy. That’s why newsrooms employ more than one reporter, in some cases dozens of them. Even if a reporter at a given organization is temporarily being tied up on some red herring “distraction” issue, there are many others who are working on reporting whatever topics are presumably being distracted from; it’s not an either/or proposition. (I previously wrote about the common—and often mistaken—complaint that “the media isn’t covering” a given story).

This is not to say that politicians and others never try to bury bad news behind even worse news or hope to distract or diminish the public’s attention. It’s a well-known tactic, and one reason why press offices often release bad news on Fridays. As Slate noted, “Investors and journalists have long complained that companies release bad news—a failed product trial, a recall, a Securities and Exchange Commission investigation—on Fridays, particularly after the market closes. The Friday release is a transparent attempt to evade fallout by burying bad news ahead of the weekend…. Why do companies try to bury the news on Friday? Whether you’re a press aide to a senator or an investor relations official, there’s a natural psychological tendency to take steps to ensure that good news is trumpeted loudly while bad news is whispered sotto voce. In addition, when things are going poorly at a company, executives tend to focus on strategies that will get them through the next few days, the next quarter, and the next year—in that order. If that means buying a few days’ reprieve with a Friday release, they’ll do it.”

But choosing what day to release information that will come out sooner or later is not the same as Trump issuing some false or bizarro comment that he knows will be covered in the hopes that it would somehow distract from some other topic he hopes will not be covered. There was even an infamous case of a British government advisor who suggested that the days after the September 11, 2001, attacks would be a good time to issue unpopular statements because the attacks would dominate the news coverage. This, also, was not a case of a person or government creating an intentional “distraction” from something else it was involved in.

It’s also worth noting that the Trump Distraction theory implicitly assumes that whatever
Trump is distracting from is worse than what he’s drawing attention to. But the fact is that Trump is widely criticized–and even mocked–for many of his alleged “distraction tactics.” His recent comments about Denmark and Jews have drawn widespread jokes and scathing attacks, including from Jewish groups who explicitly called them anti-Semitic. Whatever Trump would be trying to distract from, this hardly seems to be a winning strategy.

Of course it’s possible that Trump has, at some point, said something outrageous solely for the purpose of distracting from some other story. But there’s no evidence that it’s done routinely as part of some strategy by a political mastermind. He has a long history of lies, outlandish actions, and wild conspiracies. The principle of Occam’s Razor suggests that the simpler explanation is more likely to be the correct one: Trump’s wild statements are the result of pathology and impulse, not a considered strategy of social distraction.