How a fictional missing girl led to a massive police search that terrified a community. My recent article takes a closer look at a recent child abduction rumor and panic in England…

A mother recently claimed in a Facebook post that an eight-year-old girl had been abducted by two men in a white van in Felling, England, and asked those in her neighborhood to be on alert. It understandably caused alarm—despite the fact that the victim did not exist.

Rumors about the kidnapping were widely shared on social media; for example, one post began with the requisite plea for viral status: “XXXXX URGENT SHARE SHARE SHARE XXXXX: A 7-year-old girl has been kidnap from outside of the church next to Carl gills in Felling, Gateshead. Police have helicopters and officers in the area. She is wearing black leggings and pink purple top hair is blonde brown. She has been taken by two men in a white van. Registration is for a black car but it is a white van using false plates  AP04 USH” 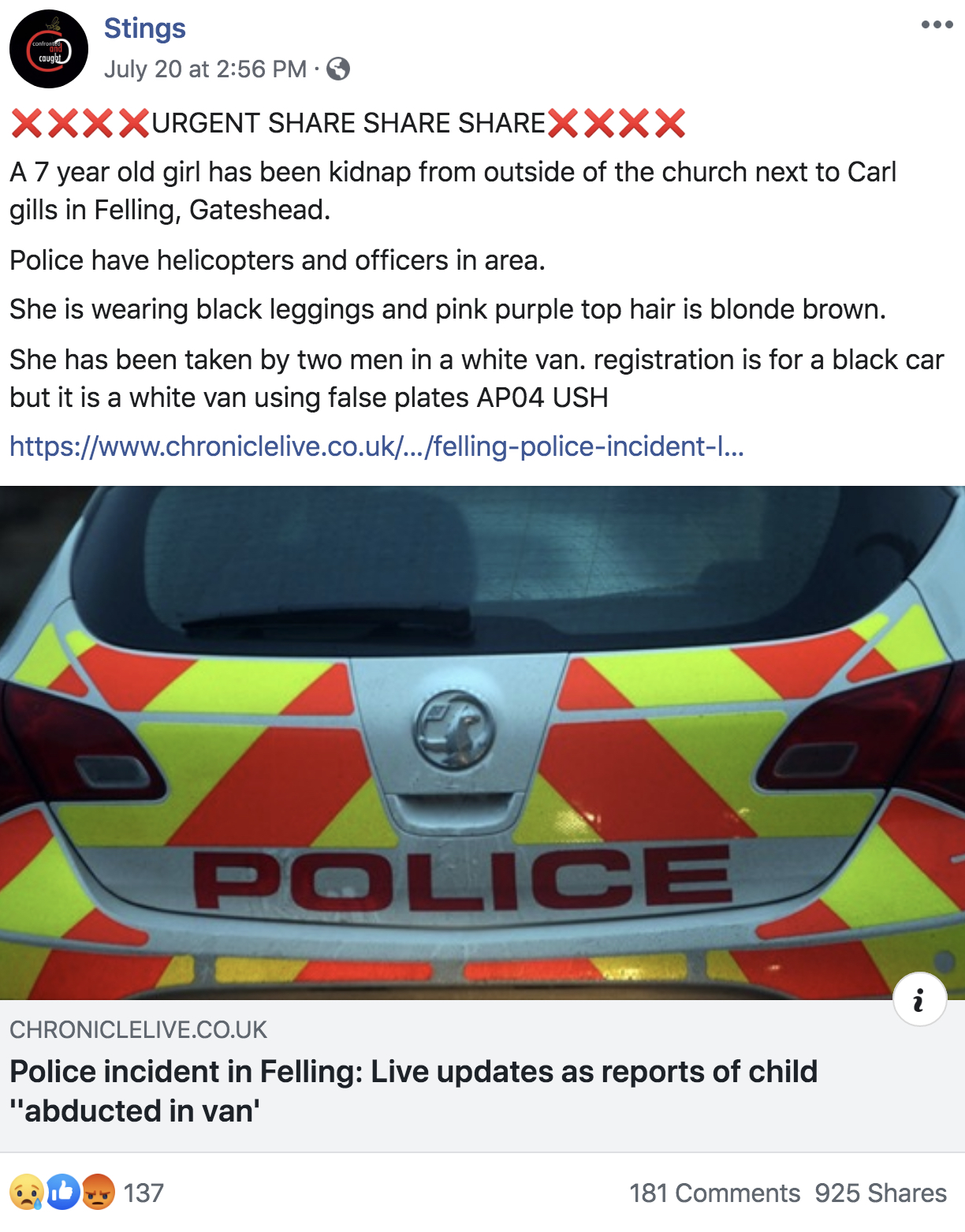 Indeed, thirty police officers swarmed the area in cars and helicopters looking for the missing girl but found nothing. Police spent hours reviewing CCTV footage from the area—England is the most heavily surveilled country in the world, with four to six million CCTV cameras in public places—and saw no abduction or even any attempted abduction. Even more puzzling, no children were reported missing from the area.

While police investigated, social media buzzed with thoughts and prayers for the girl and her (nonexistent) distraught family, with hundreds of sentiments such as “Hope she’s found soon” and “I hate this world and the horrid people who live in it.” 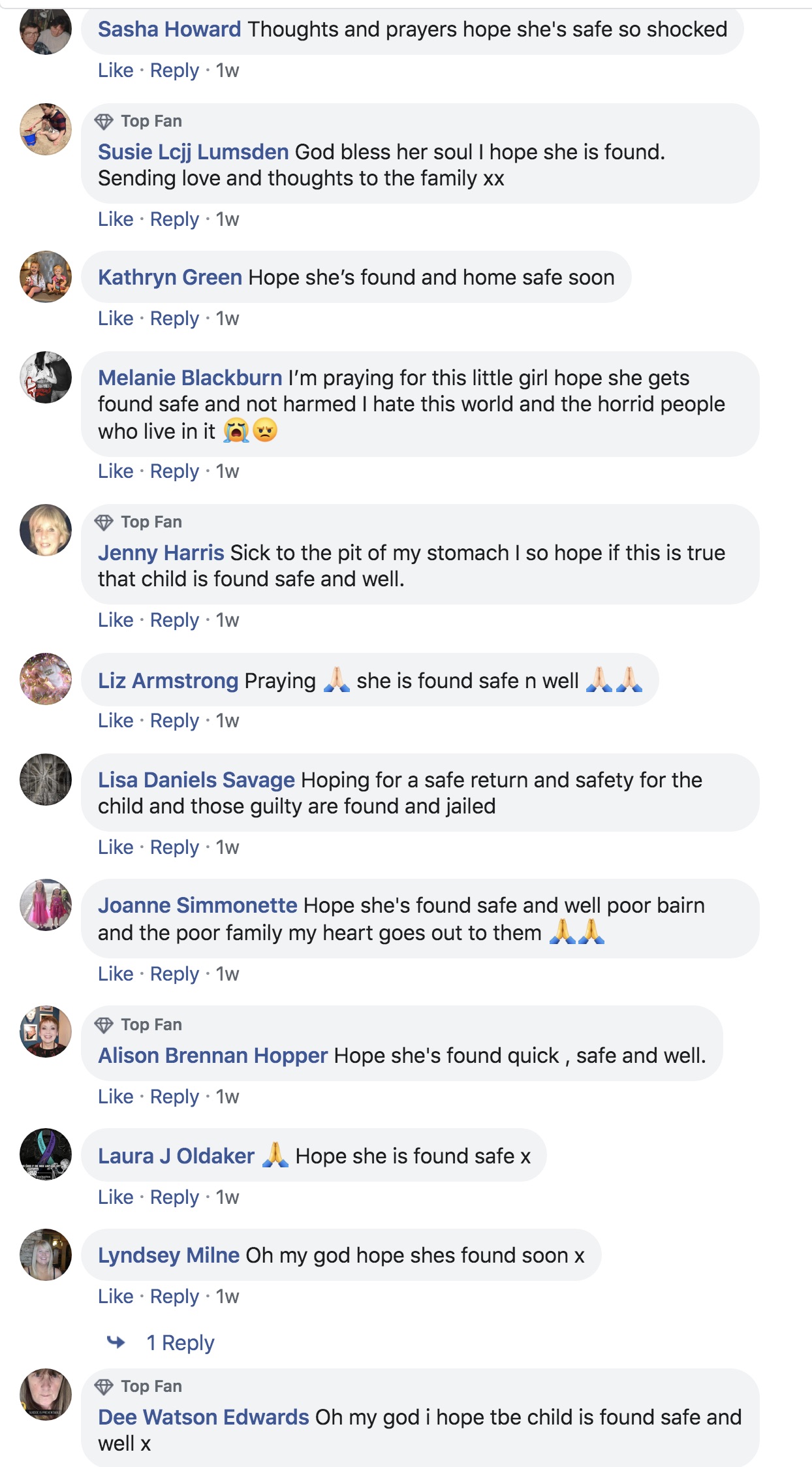 The incident is an interesting one from folkloric and investigational points of view and merits a brief analysis. Reporting from The ChronicleLive website is especially useful, as it provides a rough timeline of its coverage:

The mother who posted the item, Angela Wilson, eventually admitted to police that she didn’t know if anyone had been abducted or not but had merely repeated what her young daughter told her: “My child was outside playing with three friends, they all thought they saw, or heard, an abduction…. She didn’t see it herself, but that she heard the screaming.”

Thus screaming was interpreted as an abduction. Shouting and yelling children are of course common in playgrounds, parks, and anywhere else children gather to play, and the mere sound of a scream—if indeed it was a scream—would not necessarily indicate that anything bad was going on. A shriek of terror can sound exactly like a shriek of glee. But Wilson’s daughter and her friends duly mentioned it to her, and she in turn took to social media to warn others.

This solves one mystery but raises additional questions: If the children didn’t actually see any abduction—or even anything that could have been mistaken for an abduction such as perhaps a man putting his tantruming child into a vehicle—then how could they (or anyone else) have described the girl or her abductors and their vehicle? A shriek may or may not indicate an abduction, but it doesn’t offer any description.

It’s not clear who introduced the “black leggings and pink purple top” and “blonde brown hair” descriptions, much less the license plate number of the abducting vehicle. Thankfully it seems that no actual specific person was falsely accused in this incident—though it does happen; more on that later—but what if that license plate happened to be registered to a van (especially a white or black one) and a mob surrounded its presumed pedophilic, child-snatching occupants?

While some people (including journalists) recognized that much of what was circulating was unverified rumor, misleading news headlines seemed to officially confirm that a kidnapping had indeed occurred, regardless of whether the particulars were correct. For example, one headline read “Police Confirm Report of ‘Girl Being Forced Into Van’ On Street,” which surely led many readers to believe that the abduction they’d been hearing about had been “confirmed.” Yet a closer reading notes merely that the police “confirmed” that they were investigating the incident (which frankly was obvious from the police presence)—not affirming that it happened. 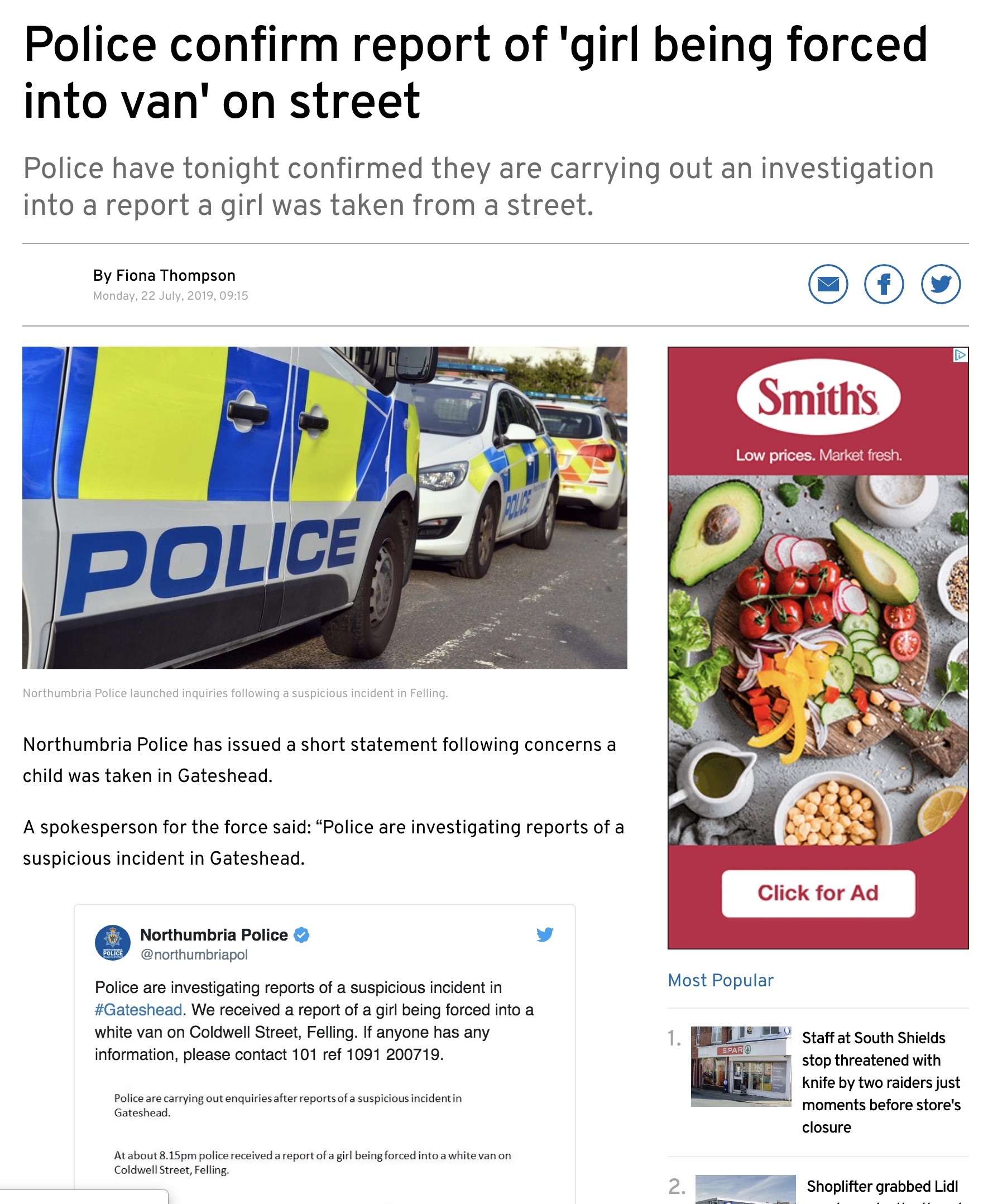 Once the report was determined to be false, a predictable mixture of relief and anger flooded social media. The abduction (seemingly validated by headlines and the very public police presence) had caused considerable alarm in the community, and the news that evil men in vans weren’t lurking in the neighborhood to snatch children was widely welcomed. But others criticized Wilson for lying or perpetrating a hoax. As is often the case, people fell into the false-choice fallacy of assuming that the abduction either a) was real and had happened more or less as described or b) that someone was intentionally lying about it or hoaxing. Yet there is a third option—one that’s more common than either of the others: a misperception or misunderstanding, amplified and twisted by social media.

It’s interesting to note that no one involved felt they had done anything wrong. The daughter and her friends were, understandably, not punished for making a false report. Wilson received some criticism on social media for her role but defended her actions: “We were all very worried, obviously I’ve panicked and, thinking I’m doing a good thing, put it on Facebook, because at that time I was convinced it had happened. Imagine if something had happened and I hadn’t done anything. I wouldn’t have been able to forgive myself… I didn’t expect it to get out of hand so quickly… I’m not lying, I would not make that up, it would be absolutely sick for somebody to do that. I’ve got my own children, I was doing what I thought was right, any mother would do the same. We were out in the back lane searching like everybody else.”

Wilson’s error was not in reporting it to police (apparently she herself did not contact the police with the report; someone else who had seen her post on social media decided to do it for her) but instead in posting the warning on social media, essentially circumventing proper investigational procedures. Rumors and gossip have always circulated informally, outside official channels of information; the fact that it now appears in typed words on a smartphone or computer screen instead of whispered over a backyard fence or a round of beers lends it undeserved credibility—and gives it an unprecedented potential audience. Had there been an actual abduction, Wilson’s actions would likely have hindered the effort to recover the little girl because police had to dedicate resources to pursuing spurious reports, rumors, and dead ends.

At each stage people justified their lack of skepticism by erring on the side of caution; even those who had some reason to doubt that anyone had been kidnapped likely took a “better safe than sorry” approach, seeing no harm in sharing the information on social media—and potentially saving a girl’s life if the information was true and the right person happened to see it and be in the right place at the right time.

But like all social media posts, people should exercise critical thinking and judgment before sharing information. Some of it may be true, but often seemingly credible information—especially “breaking news updates” about child abductions—is false and in many cases has led to innocent people being accused or even attacked by vigilantes. In 2018 and 2019, dozens of people were killed in India when mobs set upon suspected child abductors they’d been warned about in bogus messages on social media (for more on this, see my article “Social Media–Fueled Child Abduction Rumors Lead to Killings” in the January/February 2019 issue of Skeptical Inquirer magazine). The ChronicleLive newspaper, to its credit, recognized that much of the information being circulated was either rumor, unverified, or flat-out false and stated as much.

In classic rumor and moral panic pattern, the specifics of the story constantly changed, sometimes by the minute. Was it a white van or a black sedan? Was it one or two men? Were the men white in a white van, or black in a white van, or white men in a white sedan, or black men in a black sedan? Such crucial details can and do easily become confused: urgency, not accuracy, is the mandate in such circumstances. Fact-checking be damned, we’ve got vans of child-snatching pedophiles to be alert for, and often one scapegoat looks as good as the next.

False rumors of child abductions have become increasingly common over the past few years as more and more people turn to social media to share warnings. 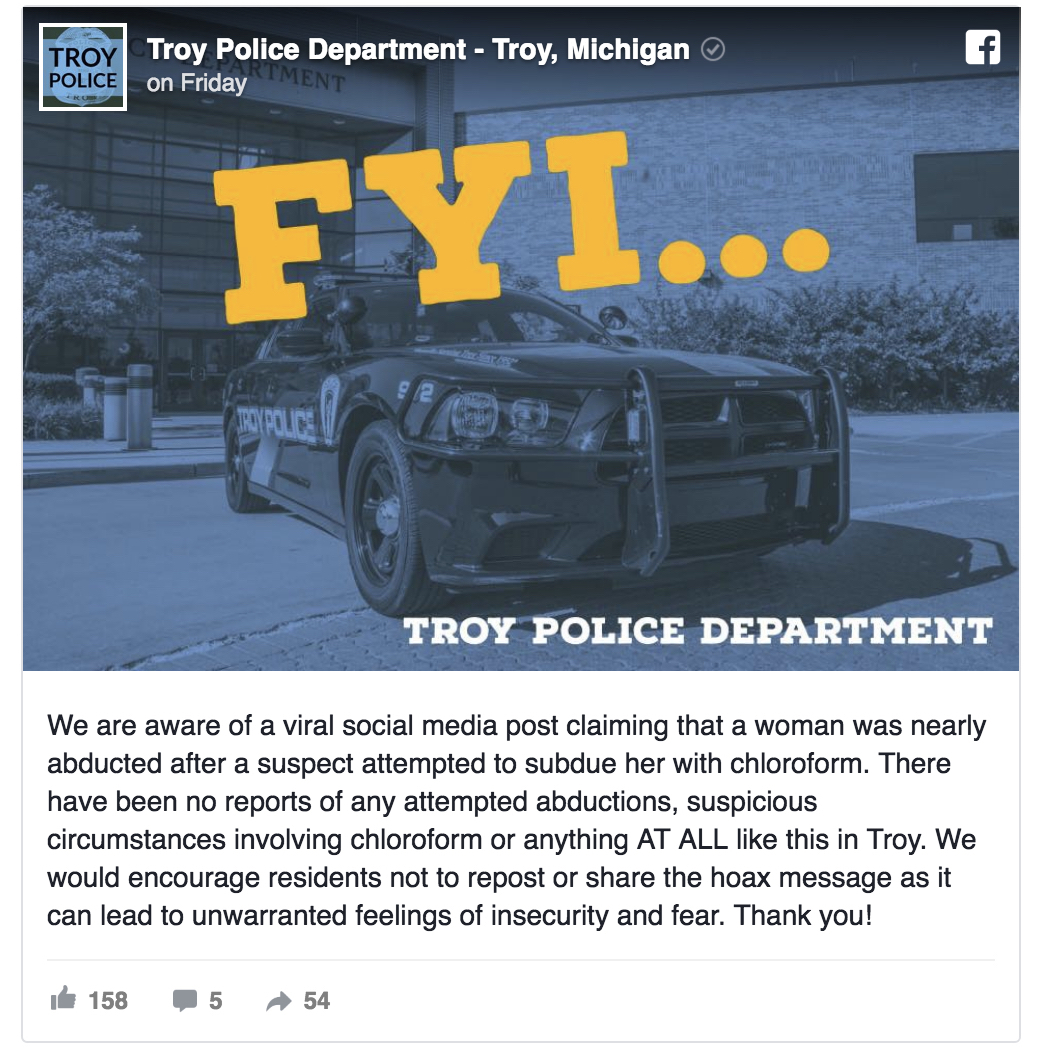 Unfortunately these false warnings often target racial and religious minorities. In June 2018, a Kansas man posted a message on Facebook with information claiming that an African American woman had attempted to abduct his child at a local Walmart. When contacted by police and shown video evidence that nothing had happened, he admitted that he hadn’t personally witnessed the attempted kidnapping he described but was merely reporting what his wife had told him about what his sister-in-law had told her about what she claimed she saw. This game of rumor telephone might be cute in a classroom but had real consequences: photos of the falsely accused African American (and her vehicle) were widely shared on social media, branding her as a potential child abductor (or worse).

A year later, in April 2019, a mother called 911 to report that an Egyptian man had tried to abduct her five-year-old daughter at a mall in West Virginia. The man, Mohamed Fathy Hussein Zayan, was confronted at gunpoint by police and mall security and arrested. Further investigation and review of video surveillance revealed that Zayan had never even touched the girl, much less tried to abduct her. Thus an innocent Muslim man who never even touched the girl was falsely accused of an attempted kidnapping by the girl’s Caucasian mother. There are countless other examples, but it’s important to recognize the harm that false reports can do to innocent people, and especially people of color.

There are many other cases, and these are not isolated incidents. Despite common “Stranger Danger” warnings, child abductions are very rare. Not only are children rarely kidnapped, but the vast majority of abductions are carried out by one of the child’s parents, relatives, or a caregiver. The image of white vans carrying men (people of color or otherwise) lurking around town to abduct kids is more of a social Boogeyman than a reality, and false abduction rumors only fuel fear and panic. As always, the best defense against misinformation is skepticism and media literacy.

Adapted from my CFI blog “A Skeptic Reads the Newspaper.”