With the recent trials of Derek Chauvin and others, I’m seeing a common fallacy: Seemingly outrageous legal defenses are held up as evidence of how horrible American social values are. But the outrage is evidence of nothing more than a misunderstanding of the justice system, as I wrote in this 2019 piece:

In an article by Bil Browning for LGBTQNation headlined “Texas Man Gets Probation after Using ‘Gay Panic’ Defense to Explain Killing his Neighbor” noted that “James Miller of Austin, Texas was found not guilty of manslaughter and murder by a jury after killing his neighbor, Daniel Spencer. After Miller used the ‘gay panic’ defense, claiming Spencer made a pass at him, the jury found him guilty of criminally negligent homicide and sentenced him to 10 years of probation.” 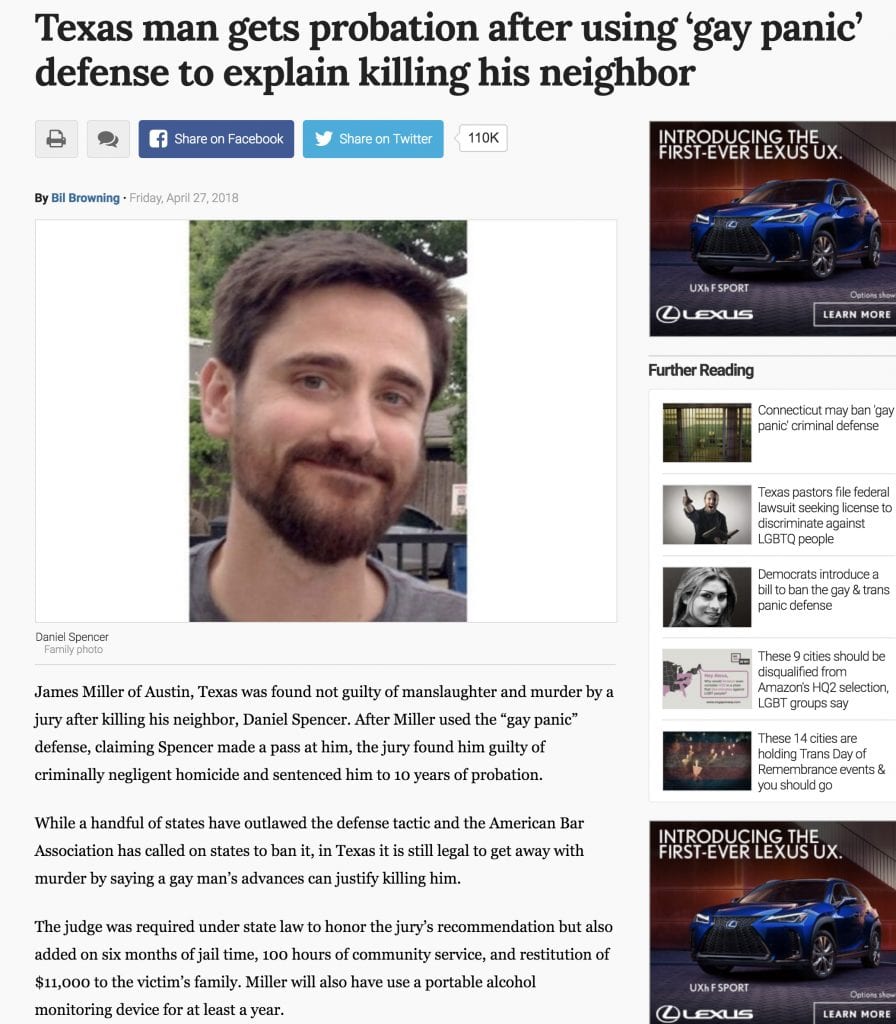 The murder of Daniel Spencer was a serious and tragic crime, but the headlines it spawned may mislead the public into assuming that Miller got probation because his lawyer proposed that particular claim. Examining the topic through a media literacy lens we see that it may or may not be true.

This headline is an example of a “post hoc ergo propter hoc” (“after this, therefore because of it”) logical fallacy, and it’s common in news reports about the outcomes of trials. Defense lawyers make several arguments, including patently false and controversial ones that make headlines, in defending their clients. Just because a given argument was put forth by the defense does not mean that the result of the case (conviction, acquittal, etc.) or the penalty (30 years, probation, etc.) was due to the judge or jury believing that specific argument. In other words just because your lawyer offered some ostensibly implausible argument as part of your defense doesn’t mean that anyone believed or endorsed it.

Seemingly outrageous legal defenses make the news periodically and are held up as evidence of how backward American social values are. But the phenomenon deserves a closer look. Not only is the person making some potentially outrageous or offensive comment often in the minority, but sometimes that are obligated to make that argument even if they personally disagree with it. In many cases it’s a defense attorney for an accused individual. Lawyers are ethically and legally obligated to represent their clients to the best of their ability. In criminal defense trials that sometimes necessarily involves making unsavory claims and assertions. It’s not clear why anyone would be surprised, much less outraged, at motions or arguments made by defense attorneys on behalf of their clients.

Examples include Ethan Couch, a Texas teenager who in 2013 caused a drunk-driving accident that killed four people and seriously injured two others. His defense infamously argued that Couch suffered from “affluenza,” an imaginary condition brought about by his privileged childhood in a wealthy family in which he didn’t—and presumably couldn’t be expected to—understand the consequences of his actions. Couch was sentenced to ten years of probation, spawning outraged headlines and commentary. 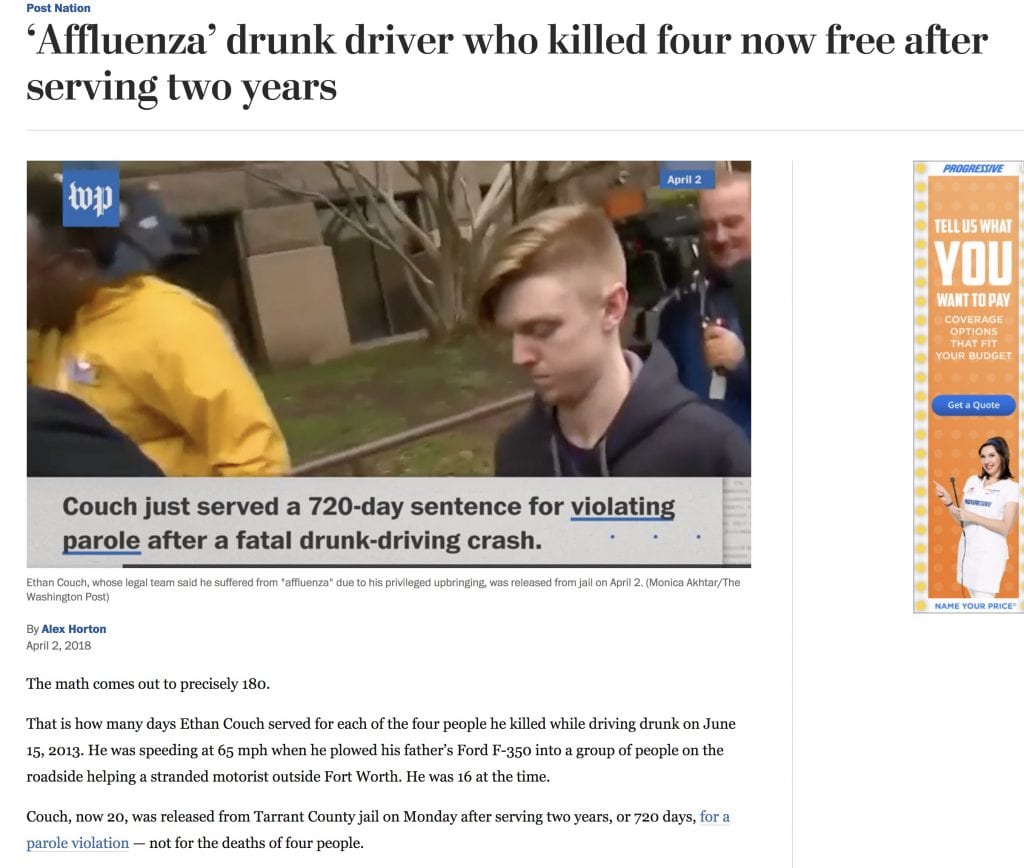 Other examples include the “Twinkie defense” (in which the lawyers for Dan White, convicted of voluntary manslaughter in the killing of two people including Harvey Milk in 1979, claimed that the crime was due to underlying depression as indicated by his consumption of Hostess Twinkies); and the November 2018 acquittal of a man in Ireland whose defense lawyer, Elizabeth O’Connell, asked the jury to consider whether the alleged victim’s thong underwear indicated her interest in him. The remarks were rightly and widely denounced across Ireland, from the Parliament to social media, where photos of thongs circulated with the hashtag #ThisIsNotConsent.

A widely-shared meme on December 9, 2018 stated that “Adult Brock Turner only served 3 months for raping an unconscious woman because serving jail time would ‘ruin his life,’” and compared his sentence to the case of teenager Cyntoia Brown, who was sentenced to 51 years in jail for murder but later granted clemency and released after serving 15 years for the killing. There are of course real racial sentencing discrepancies (despite the significant differences between these two cases), but part of the message is demonstrably false.

The judge in Turner’s case, Santa Clara County Superior Court Judge Aaron Persky, never said that the sentence reflected a desire not to “ruin his life.” That phrase was used by Turner’s father, not the judge. Persky did indicate leniency toward Turner in sentencing, but he did not reference the infamous phrase widely attributed to him, and since Turner’s father didn’t impose the sentence on his son, it’s not correct that Turner “only served 3 months… because serving jail time would ‘ruin his life.’”

In any event the public made their displeasure with the penalty known. Judge Persky was the subject of a successful effort to have him removed from the bench; he was recalled in June 2018, the first California judge recalled in 80 years. In fact California passed a law mandating minimum sentences in sexual assault cases and minimizing judicial discretion in such cases as a direct result of the Turner sentence.

Information Gap Between Juries and the Public

Judges and juries are subject to strict, and often arcane, rules about sentencing. In many cases they have far less discretion than the layperson assumes. A murdered victim’s family may believe that nothing less than the death penalty or twenty years in prison could begin to punish a convicted defendant for their loved one’s death, but if under the law—and the specific circumstances of that case—only manslaughter or negligent homicide apply, the defendant is likely to get a far more “lenient” (but judicially appropriate) penalty. Judges and juries are neither expected nor required to explain their reasons for convictions or sentencing.

The concern and outrage in these cases may be real and legitimate, but it’s important not to mistake a legal defense strategy for an accused criminal with tacit social endorsement of that claim. In these cases it’s often assumed, rightly or wrongly, that the defense’s argument influenced the outcome of the case or sentence given by a judge or jury in the case. Often there’s no reason to believe that; the judge in Couch’s case gave no explanation for her decision nor did the Irish jury of eight men and four women. There could have been any number of reasons why the defense prevailed in these cases (compelling exculpatory evidence, eyewitness testimony, and so on), and the judgments could well have been rendered despite—not because of—the inflammatory defenses.

The public—informed not by judicial standards of evidence but incomplete and often-sensationalized media stories—assume that they understand why judges and juries render their decisions, though they rarely do. For example when Bill Cosby was convicted after a previous acquittal, many in the news media attributed the difference to the emergence of the #MeToo movement, though jurors later said it had nothing to do with their decision.

Just because one part of a person’s defense garners attention or outrage doesn’t necessarily mean it is the only, or even the most important, aspect. The arguments made by defense lawyers (much less the defendant’s parents) are not, and should not be, assumed to represent the values, opinions, or beliefs of the public at large. As is often the case, the fact that these positions spark widespread public approbation reveals just how unpopular they are.